The Interactive Advertising Bureau (IAB) and PricewaterhouseCoopers (PwC) released their annual Ad Revenue Report yesterday. Though there were increases in many online ad categories compared with 2005, it’s interesting to note that nearly every one declined in percentage of overall online ad revenues. In fact, the only segments that increased as a percentage from 2005 are lead generation and display advertising. This has interesting implications for the direction of local online advertising, and investments being made throughout the marketplace, as related to yesterday’s post on online consolidation and revenue diversification.

Despite these increases over ’05, every category dropped in percentage of overall ad revenue; except for display and lead gen. The former is critical to the search giants that have paid rather large premiums to bolster their display ad capabilities (see yesterday’s post); and these figures are affirming for their ROI potential with these purchases. Second, increased percentage of lead gen advertising is consistent with Kelsey Group data that forecasts growth in ROI oriented ad formats. 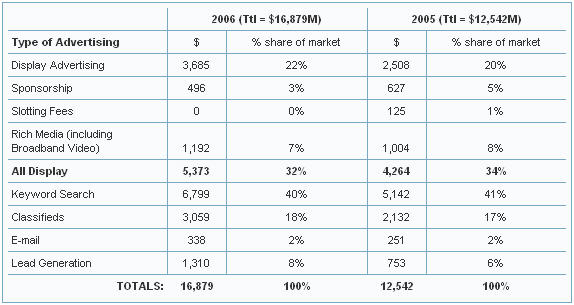 As search growth slows due to an increasingly crowded and competitive landscape, online ad providers will push lead gen products more and more. This suggests we could see more lead models start to take hold, and more specialization in lead forms. Pay-per-call will particularly see growth as its value proposition will gain more exposure as alternatives for paid search are sought. The wild card in all this could also be Pay Per Action, which is being developed in different ways throughout the marketplace — most notably by Google (and earlier this week by job search aggregator Indeed).

Video Joins the Mix
Lastly, It’s also interesting to note that video dropped as a percentage of total ad market spend but increased in real dollars. This is a small segment but very much a growing one, as examined in the TKG white paper released earlier this week, “Online Video: A New Local Advertising Paradigm”. The executive summary can be found here.

The growth in video will partially be driven by user interest and acclimation with video (as popularized by YouTube and others). User View Data (wave IV) presented in the video paper shows that 59 percent of survey respondents (n=501) claimed to watch online video. More important is what users did in response to video ads they watched. More than half of respondents engaged in some sort of response activity such as visiting a website, going to a physical location, or making a purchase.

In terms of quality exposure this sample group can also be arrayed against the overall demographics of broadband users, in order to extrapolate the favorable likelihood of reaching attractive and buying empowered consumer groups.

More coverage of the video report can be found at WebProNews, MediaPost, and USAToday. The press release is here. And the IAB report can be viewed here.