Video search engine Blinkx has taken a considerable step toward monetization by developing an ad serving technology that contextually matches advertising with video clips. Known as Blinkx AdHoc, this will offer a few different ad formats including insertion of small text and graphic ads within video clips at appropriate moments, based on the same voice recognition technology that drives its flagship video search engine. This will bring Blinkx from a video search engine to a publisher network consisting of more than 12 million hours of video to be monetized – a video AdSense of sorts. Speaking of Google, it too is rumored to have video ad matching technology in development. Combined with AdWords and AdSense, this would make Google a powerful force in this developing space, which has lots of implications for local.

As we examined in the recent online video report (and in this previous post), video search comes with a set of challenges that could impede the growth of online video. There are lots of technologies emerging to deal with this issue, but it basically comes down to the fact that a piece of video content isn’t inherently searchable in the way that text is.

Ever-elusive video monetization is meanwhile closely tied to this, as it has the same core challenge. This follows the simple logic that once you can automatically discern what a piece of video content is “about,” you can not only index it, but also more effectively target advertising. So it follows that the leaders in online video search will be the ones that solve the monetization challenge.

These efforts by the likes of Blinkx have been partly driven by the inferiority of current methods. Many advertisers that have dabbled in online video have found it easiest to just use their current creative (30-second ad spots) in online video in the form of pre-roll ads. But users have voiced that they largely don’t like pre-roll ads. Meanwhile, another method – accompanying text ads that are contextualized to a video’s title or meta data – lacks a level of relevance, exposure and interactivity. 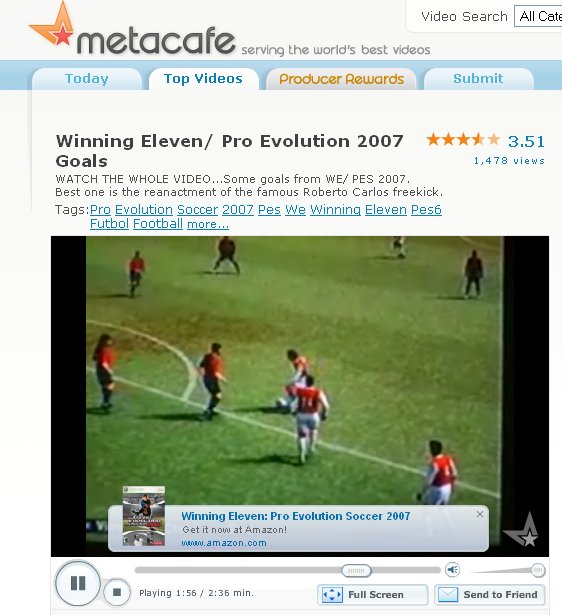 So we’re starting to see interesting ad serving technologies emerge, and Blinkx’s contextual ad network is the latest. Until now, we’ve also seen YouTube begin to experiment with inline video ads, while ScanScout and Adap.tv (like Blinkx) employ speech recognition technology to dynamically insert contextual ads around video content, and in some cases at the exact moment a keyword is spoken. Ad formats can be text and display and offer the ability to watch an accompanying video or go to a company’s Web site.

Adap.tv’s graphic ad insert example to the left (click to expand) illustrates the placement of an Amazon.com ad for a soccer video game during a soccer video clip. The company has partnered with third-party ad networks such as Shopping.com to bring in its advertisers. On the other end, it is working with Metacafe and other video destinations to incorporate its ad serving technology in their video clips.

So how does this relate to local video advertising? The local video ads we’ve seen integrated by Citysearch and others are ads themselves, so they don’t need contextually placed ad inserts as outlined above.

They do, however, possess the same video searchability challenge in becoming more identifiable and SEO friendly. This isn’t as much of a challenge with the 300 or so videos that are currently on Citysearch, which can be tagged manually. But when this medium explodes in the local search space and becomes the next must-have ad format for many small businesses, which we believe it will, automation will be paramount.

“Since search engines are designed to crawl text, not images, on Web sites, from a pure SEO perspective, video isn’t quite there yet,” TurnHere CEO Brad Inman told me. “However, we are working very closely with the major search engines to develop systems, such as transcriptions, that will effectively and efficiently translate video content into natural search results.”

This is even more relevant given Google’s announced intentions with universal search, which will integrate video (among other things) more prominently in its search engine result pages.

“Through TurnHere’s distribution agreements with local search sites such as Google Local, we can ensure that links to a local business’ video ad spot appear prominently in the local search results,” says Inman. “We have found that the presence of a video link in these search results brings an appreciable increase in customers to a business.”

Overall, video represents a double-edged sword for searchability and monetization. It is much more content-rich than text, allowing for a gold mine of content and “ad hooks” against which to apply search algorithms. The challenge is to mine that content effectively and bring it to the surface so search engine crawlers and contextual ad placing engines can effectively find it.

Look for continuing innovation to solve this problem and help the exploding ranks of online video clips – both local and national – to be more effectively found and monetized.