Classified aggregator Oodle launched a brand-new interface today with a series of functional and aesthetic enhancements that will serve as the basis of a new product strategy and publisher network.

Beneath the surface, the company has refined its taxonomy to serve more relevant results and create a more intuitive experience. For example, a semantic analysis of search queries knows that the term “2004 Toyota 4Runner” is a car. Result pages correspondingly have the appropriate search refinement drill downs (make, model, year, etc.).

“We’re making the search box smart,” says Oodle CEO Craig Donato. “We have tons of contextual information about the information people are looking at, which we can use to help them make better decisions.”

There are also a series of user-centric tools meant to gain stickiness around classified search such as pricing trend charts. These include price indexes that show you average prices and how far above or below that mark a given item is. There are new item galleries and mapping features that let you roll over map pushpins to reveal listings details. 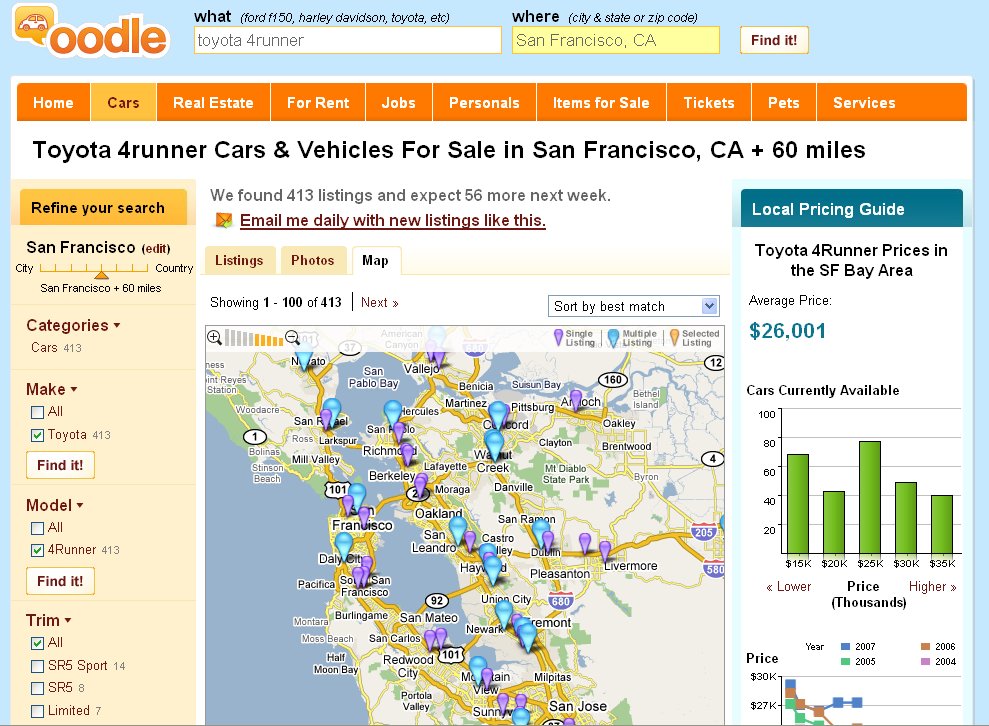 The site now also has some predictive modeling that shows users how many new results it expects to see in the near term. This can be particularly useful for users to gauge how quickly how quickly they should jump on an item based on supply.

“Going by an indication of whether a listing like this pops up every three days or it pops up every six months, you’ll have a very different reaction to the offer,” says Donato.

E-mail alerts are also offered, which are user-centric and provide a way to identify engaged and ready to buy users. As we mentioned in a past report, users who are proactive about setting up e-mail alerts or RSS feeds are explicitly stating what they are interested in and implicitly stating that they are ready to pull the trigger if pushed the right listing. The site is currently sending out 130,000 e-mails daily, according to Donato.

“On the current site [e-mail alerts] look like a feature when really they should be a natural extension of search,” he says. “We have the ability now to dynamically forecast listings and ask users if they want results e-mailed. That is a much better contextual way to integrate the functionality of alerts in common language rather than trying to sign up for an alert. God knows what they think an alert is.”

Donato has some interesting ideas of how he wants to continue building on the site experience, such as making listings more portable — like e-mail alerts — with things like “send to phone” SMS functionality. These center on ways to increase user traction and also continue to build a business model around the relatively young animal that is free online classifieds.

Currently the site makes money by a combination of paid placements in search results and distribution deals for its content with newspaper partners such as The Washington Post’s ReadExpress.

“Anyone can push their listings into Oodle for free but they can bid on increased visibility so essentially what we have is an AdSense for listings,” says Donato. “Throughout the course of 2007 the rate of service has increased by 10 percent per month.”

More importantly, the company is building partner network of media sites (newspapers, TV stations, Yellow Pages sites, etc.) that will use its ad server and API to power a classified marketplace. The network currently has more than 200 signed partnerships that will each roll out an Oodle-powered classified product over the next six to eight weeks, according to Donato.

“You’ll start to see this show up in lots of interesting places throughout the next quarter,” he says.

The redesign could go far in boosting the appeal of the product for these partnerships and also differentiate Oodle’s own destination in the crowded and fragmented local search space, and to lure users away from the dominant Craigslist, whose feature set is paradoxically wanting.