Most of the discussion on local video advertising has happened around IYPs and local search sites such as Citysearch. This is certainly where most of the activity is taking place as these companies are taking the guesswork out of video production and distribution for resource-constrained SMBs. This is of course happening with the help of a growing list of video vendors, such as TurnHere, whose services IYPs essentially resell.

But on the other side of this coin are SMBs that decide to go it alone. This is a rare breed among the ranks of resource-constrained and tech-illiterate small businesses that make up the universe. But this animal has proved to learn some clever tactics to get its branding “out there” via video. One way this has happened is simply through uploading new or existing creative to YouTube and making sure it is SEO friendly.

The reason this is an interesting approach has a lot to do with the universal search (or blended search) movement being pushed by Google, Yahoo! MSN and Ask.com (which is the unsung hero and most meaningful practitioner of the movement). For those who don’t know, universal search seeks to evolve the search engine result page from a series of text links to a more multimedia-rich blend of images, maps, local results and video. (Amazon’s A9 was an early pioneer of this, circa 2005).

The thought is that users’ expectations are evolving to want everything in one place online. Compare that with traditional media where everything is siloed in different buckets (television, radio, newspaper, classifieds, Yellow Pages). Rising broadband penetration has also helped to push this forward, at least where video comes into play. 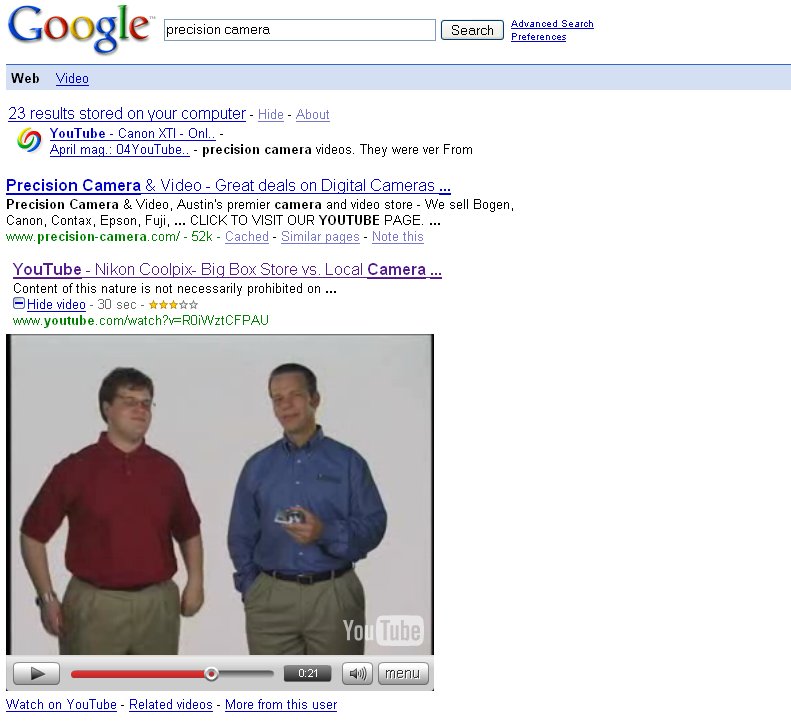 So the point is, as search engine algorithms look more favorably on video content for the top spots on their results pages, opportunity for exposure increases for any video producer that is on top of his SEO game. Combine this with the dearth of video content (relative to the greater universe of text on the Web) and there is some prime real estate for the picking (above image of Austin, Texas-based Precision Camera’s spoof on Mac/PC ads in the second spot on Google).

In some ways, this could also represent a back door way into top spots in Google that are traditionally impossible to get because of popularity or bid pressure (keywords such as “restaurant, Manhattan”). Because some top spots are “saved” for video and because of, again, the relative dearth of video supply, optimized videos can essentially find a secret side door into these coveted spots (at least for now).

So what are these SEO tactics? One example some clever SMBs (and search engine marketers) have started to use is to have the video on their Web sites linked to the same video that has been uploaded to YouTube. When Google sees that the copy and tags surrounding the video are the same as the corresponding video on YouTube, it will rank the video highly as part of its general favorability of YouTube content. Clever.

Back to IYPs, they should see an opportunity in this trend. Instead of having video content buried within their own listings, is there an opportunity here to make videos more portable and optimized to live on in other places such as YouTube and Google results pages? This has the potential to not only drive traffic back to IYPs, but also carry their branding, which enhances exposure through viral distribution. Not to mention that IYPs can stake a claim in this universal search land grab.

Many more interesting SEO tactics are possible, and there is an announcement coming next week from a company that specializes in this very thing (can’t yet discuss). Stay tuned.