After talking with Krillion CEO Joel Toledano last week, it became clear that this is only the beginning of the company’s march toward feeding its content and product (and inventory) search capability to other well-traveled local product search destinations. Tomorrow it will announce that Panasonic’s manufacturer Web site is next on the list.

Since Krillion launched last year, it has paid close attention to the reality that the vast majority U.S. retail activity happens offline while an increasing stake is influenced by online search ($470 M according to eMarketer). The company is among the handful of others (i.e., NearbyNow, StepUp Commerce) whose product development takes this reality to heart.

This includes individual optimized pages for millions of products (mostly in the home appliances and consumer electronics categories), searchable inventory, and reserve online and pick up in store features (proved very popular and successful for some big-box retailers such as Wal-Mart and Circuit City).

So for Krillion, these distribution deals will put its technology in front of more consumers than would have been possible on its destination alone. More distribution deals will follow, as will new product categories that are particularly conducive to an in-store pickup (think high-ticket, heavy or visually oriented items). This will involve a rev share with the distribution partner for commissions gained on the sale of items.

“With all of our retailers today, we are averaging a 4 percent commission on the sale,” says Toledano, “and we’re talking big-ticket items like flat screen televisions. The distribution deals going forward will be done on a revenue share.”

The integration with Panasonic’s store locater and product search functionality will be particularly powerful, according to Toledano, because of the inclination of consumers near the end of the buying cycle to go to manufacturer Web sites to search for specific products by name to buy locally. The functionality and data quality on these sites, however, is usually poor, representing a missed opportunity.

Deals going forward will involve both Krillion feeds that are pulled in and displayed in the distribution partners’ own interface (as done in TheFind.com) and those for which Krillion “powers” their local product search interface (as done with Panasonic). Expect many more to follow. 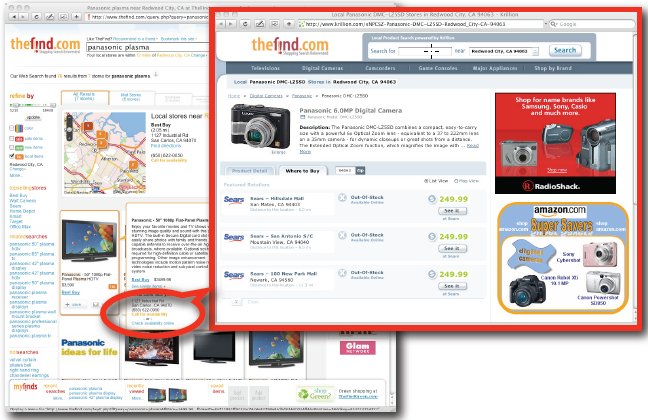