Microsoft will announce a new Live Search product today at Advance08, which gives cash back to users who purchase products through the system.

The aptly named Cashback feature will place dollar sign icons throughout paid search results wherever there are deals available. Users who purchase these items will then have cash amounts transferred to a new section of their Microsoft LiveID accounts. There are currently 450 million worldwide LiveID accounts, though Microsoft does not break out the U.S. portion (this will initially be a U.S.-only rollout).

Microsoft is launching this functionality using technology attained from its October ’07 acquisition of Jellyfish, a site that offered a similar feature. It will include 10 million product offers from roughly 700 retailers, including eBay, Barnes & Noble.com, Overstock.com, Sears, Zappos.com, and WPP (complete list here).

This is all done through an interesting mashup of CPA and PPC advertising with these retailers, explained LiveSearch General Manager Brad Goldberg in a meeting last week. Essentially advertisers will pay a combination of CPA rates that they determine as a percentage of purchase price (cash back amounts), as well as pay-per-click advertising for the listings throughout Live Search.

For the user, the benefit is clear. There are lots of online shopping engine choices out there with little differentiation, besides brand recognition for major retailers. Price can therefore be a primary decision factor, and this product seeks to differentiate Live Search on that measure. The degree of differentiation will represent Microsoft’s ongoing effort to win over users in the face of search engine loyalties or habits (read: Google).

This falls under Microsoft’s “commercial search” strategy, says Goldberg — the first of its four main areas of development to differentiate Live Search. These are commerce, entertainment, navigation and reference. It concedes to Google’s dominance in paid search but wants to lead in other areas. Part of the strategy will include a move toward more CPA advertising and user-centric tools like this.

The next ad-funded rebate will likely involve Live Search Farecast (also launched today). This will be the travel service under the Live Search umbrella, acquired through Microsoft’s April purchase of Farecast. The site finds low low travel fares using predictive modeling on the right time to buy.

Future developments in its commercial search strategy could also include inventory feeds and reserve online features for local items — a growing opportunity being tapped by NearbyNow and Krillion, among a short list of others. Goldberg acknowledges the opportunity but wants to stay focused on the e-commerce aspects of the Cashback program in the nearer term. 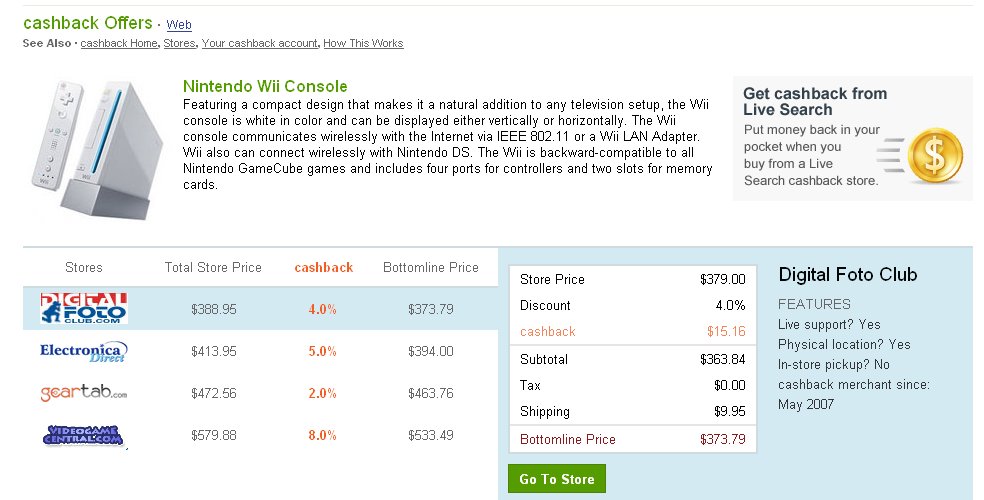 Video footage of the announcement from Advance08 will be available here later this morning.