ComScore reported today that the number of people who access local content on the mobile device is 32.5 million, an increase of 51 percent over a year ago.

This isn’t surprising: It’s in line with the premise made continually on this blog that smartphone penetration and the resulting growth of the mobile Web will result in local search volume increases. ComScore’s numbers might even be too low, in that they’re limited to the categories “online directories,” “restaurants,” “maps” and “movies.” 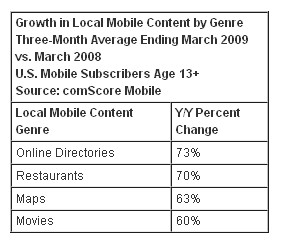 The study also broke down its figures by access methods, including mobile browser, SMS and downloaded apps. Downloaded apps showed the most growth (83 percent), which also makes sense if you consider the iPhone’s growth over the past year.

According to numbers from AdMob and Net Applications, the iPhone makes up for the vast majority of mobile Web activity. And since the point of entry to a great deal of mobile search on the iPhone is via apps, growth can be expected there. Consider also the prevalence of a few local iPhone apps, like Yelp and Urbanspoon, which are among the most downloaded apps of all time.

But despite the growth of apps as a point of entry for mobile local search, the comScore study showed the mobile browser as the access method with the greatest amount of use, with 20.7 million users. Apps were actually lowest overall with 11.3 million users. Between the two was SMS in second place with 11.7 million users. 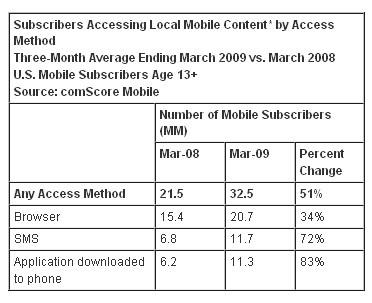 As mentioned in the previous post, the mobile browser on the iPhone just became a more friendly venue for local search given the new location awareness that will be baked into Safari. We’ll see other mobile platforms (and desktop browsers) follow suit with location aware browsers (and the broader capabilities of the HTML 5 standard).

Expect the mobile local audience to continue to grow, while apps and mobile browsing could elbow in on SMS’ share of searches.