Jon Brod, executive vice president of AOL Ventures, Local & Mapping, gave attendees at Marketplaces 2010 a glimpse into the direction that AOL is moving in its local strategy, specifically with Patch.com, MapQuest, its content management system Seed, its LocalFund investment arm, the relaunch of CitysBest and the forthcoming launch of Patch.org. 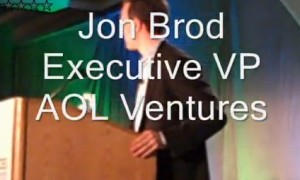 Earlier this year Brod was quoted as saying that local is a “great white space.” He now admits that was a slight exaggeration based on how much has been accomplished by various players in the local space, but he stands by the vast opportunity that local offers. “Local is the largest opportunity yet to be won online.”

Further to that he commented that local is a very large and complex space and that AOL will focus on the areas it has identified but will also look for potential partnerships in areas such as search and social networking. Moreover, he made a statement about the fragmentation about the space: “People look at local as the one-ton gorilla, but really it’s 1,000 two-pound monkeys.”

AOL’s key areas of local focus are content (Moviefone, AOL Autos, etc.); Products (Seed); Acquisitions (Studionow); and Ventures (LocalFund). At the heart of AOL’s local strategy is Patch.com, which AOL acquired in June 2009. Brod hypes Patch’s method of using a scalable technology platform, structured data and low cost, but professional journalists in its markets. Patch.com is available in select markets and states now, but Brod believes that conceivably there could be a Patch in every community in the world. So, international expansion is in the cards.

Brod received multiple questions about Patch.com, including how AOL would avoid the demise that others in the space have experienced such as Backfence, which sought a hyperlocal strategy. AOL has had its own local offering in Digital City, which essentially morphed into CitysBest.com, which AOL had stopped investing in. However, in this new local strategy, CitysBest will be relaunched, with a focus on major markets in the third quarter of 2010, and thus reinvigorating the eight-year-old brand.

LocalFund, part of the ventures arm of AOL, is focused on seed and series A companies with an initial average investment of $50,000 to $100,000. He said although its scope will be global for the investments, much of its focused interest to date has been in New York, California, Israel and India.

It’s also important to note that AOL will relaunch MapQuest in 2010, a unit he admits has been under-resourced. While he didn’t provide any specific details, he said the move wouldn’t include a renaming, but rather a repositioning and would be utilized to drive local content.