YPG has also launched a new ad campaign that is clearly focused on the company’s mobile directory products. Click on the image below to check out one of the ads, featuring a muscle-bound fellow named Randy using his mobile to find new spots to replenish his body oil. After watching this, you may never visit another salad bar. You won’t ever want to borrow Randy’s phone either. 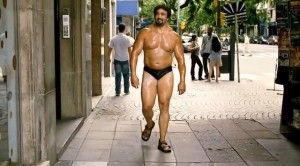 Unlike other recent directory rebrandings that have de-emphasized the traditional brand, the new YPG logo is a modernization of the existing brand with the walking fingers intact.

The ad campaign is notable in its emphasis on mobile, which arguably is an opportunity for directory publishers to establish a strong position without having to contend with the dominant position of Google, as they do on the Internet.

YPG also announced new features on its iPhone, Android and BlackBerry applications, as well as the addition of ratings and reviews (something the company has resisted in the past).

YPG has been on an aggressive acquisition program aimed at building out its suite of online and mobile products and services, and to advance its push away from an inclusion based directory model toward a local sales model that emphasizes services and performance media. Examples include Restaurantica.com, an online dining site in Canada (and a source of consumer reviews), and RedFlagDeals.com, an online promotions service.

This new branding push, and the strategy that underlies it, gives new CMO Stéphane Marceau a clear stamp on the company.