One of the challenges of running conferences is keeping our analyst hats on and covering the world outside the venue walls. We’re still catching up on notable media and tech news items from last week.

But luckily there’s a fair amount of activity happening within the conference walls. This year’s Marketplaces conference hosted great presentations and announcements from the likes of Google, Groupon, Yelp, Loopt as well as emerging topics like game mechanics.

Day 3 of the show saw a solo spot from Center’d CEO Jennifer Dulski. In addition to the company’s yet to launch Dealmap product, Dulski outlined “sentiment analysis.” This looks at the set of criteria by which local decisions are made, and on which local search tools are increasingly built.

Back to Dealmap, the site will be part of the budding trend of local deal sites. The most popular of these is Groupon, but many others are developing new twists on deal search and, to a certain extent, group buying. Similar sites we’ve seen recently include Closely and Keynoir.

The Dealmap proposes to pull in deals from a broader swath of sources than Groupon, which forms individual direct relationships with merchants for daily featured deals. One of the challenges here is finding enough inventory to fulfill demand among both users and merchants.

Groupon argues this scarcity creates value for both. The other side of the argument is that it creates churn. Advertisers, if happy with the results, have to go to the back of the line to wait for their next turn, possibly migrating to a growing list of competitors to get their next fix.

Groupon is looking at ways to create more inventory without devaluing these deals — perhaps by spinning out different categories or verticals where deals occur. The company suggested as much on and off the stage last week.

The More, The Merrier

Meanwhile, the Dealmap will similarly segment offers in different categories, including those that match Center’d’s own categories (i.e., “romantic,” “kid friendly,” etc.). It will do this by scraping a variety of online sources to create a repository of deals — presumably on an affiliate revenue basis.

Dulski argues that the time is right for this type of product, and that data indicate growing demand for local bargain hunting. The market likewise indicates this hunger, which is at least partially a result of cyclical (recessionary) and secular (increasing media transparency) shifts. 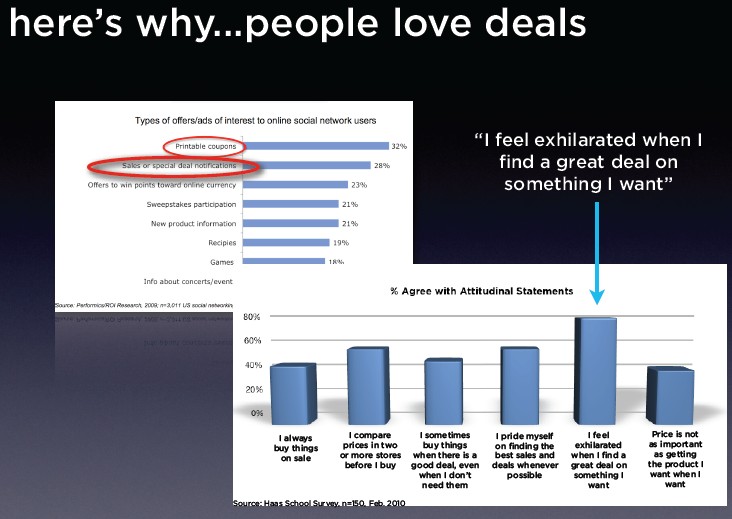