I had the opportunity to meet with Yext CEO Howard Lerman and President Brian Distelburger to talk about their recent product additions and approach to the SMB marketplace. What struck me as I entered their NYC loft-style office is the energy from the growing telephone sales team. The impression is that this is a company on the move whose team members have a passion for what they are doing. 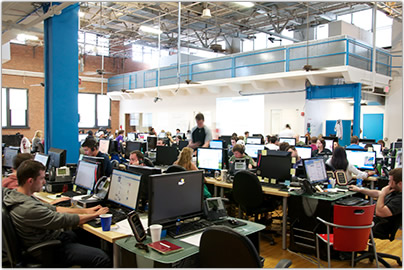 Lerman described the company as “the next generation directory bringing together social, directional and lead generation in a single offering.” Segmentation has been the key to Yext’s success in building up its advertiser base. Yext investigates and develops categories by recruiting influential advisers within a category, such as fitness, so it better understands the challenges of the category, what is important in building business (calls, clicks, appointments, etc.), types of media used and how to speak the language within the category. “Our goal is to be deep into categories rather than be shallow across many categories,” said Distelburger.

Yext’s recent real-time feed reputation management product, Yext Rep, has been very successful with many current and new advertisers that have adopted it. “More than 80 percent of Yext Rep customers have logged into the system since signing on, which has exceeded all of our expectations,” Distelburger said.

Yext hopes the Yext Rep dashboard becomes the means for advertisers to self select add-ons and campaign extensions based on their needs. The system is built to be open to new applications such as Twitter, Facebook, Yelp, directory sites and even Foursquare. Yext Rep also contains the Yext Call tracking product, which records and transcribes calls for easier tracking and action steps.

“Advertisers will tell us or even show us what they want; our goal is to provide an easy-to-use platform for them to add on and track their media choices to measure success,” Lerman said. “We definitely have an advertiser-focused strategy.”

When asked about his view on local, Lerman was quick to point out that “distance is the most relevant measure for advertisers and consumers because it determines how far you are willing to go and it reflects a clear understanding of where your customers are located.” Social media is a way of measuring the impact a company is having in its community, which local SMBs clearly understand.

Distelburger added that “we are seeing SMBs beginning to embrace online/social as a core part of the way they think about local media. SMBs have always been hyper concerned with their reputation. There is now a digitized forum for them to engage with, which they are beginning to understand and interact with.”

Plan to hear more about Yext’s views on local directional media at our upcoming Directional Media Strategies conference in Dallas, Texas, where Howard Lerman will provide a keynote address discussing his views on how small and medium-sized advertisers will drive leads in the future using online performance-based advertising.

Editor’s note: Our previous conversation with Yext can be found here.