Classifieds haven’t been especially enhanced by mobile apps — although it is nice to have them on the go when shopping for a car or a house. But Oodle keeps pushing the envelope with its effort to bring the world of social media to classifieds.

The classified site, which also acts as a platform for clients such as Facebook and Walmart, has now added an iPhone app that CEO Craig Donato says is less about search than it is about making it easier to post items. “We’ve made it really simple. You post an ad, take a picture and you’re done,” he emphasizes. The iPhone isn’t just a phone, he adds. “It is a wireless camera.”

Friends who have too many friends (i.e., 2,500 friends) kind of water down the exclusivity on this. Their friends could be just about anybody. But it still interesting. “Classifieds exist as a second degree of connectiveness,” says Donato. “The amount of want ads is very high,” especially for items such as tickets.

Donato notes that other efforts at Oodle have been moving along, including its Oodle Pro reputation management and classifieds placement program, which has just gotten its 1,000th customer. “People [especially Realtors] use Pro to get leads and to focus on taking advantage of other social features.” 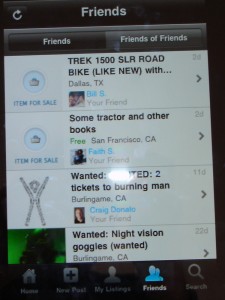