Best-selling author Steven Johnson keynoted at ILM:10 in Santa Clara today. In his talk, based on “Where Good Ideas Come From,” a new book, he focused on how local media and commerce is affected by ideal environments for innovation that don’t inadvertently add an “innovation tax.” The best ideas, he noted, come from “putting yourself in situations where these kinds of unlikely developments will happen.”

The idea for Outside.in, the local company that Johnson founded and chairs, for instance, originated from the intersection of three things: his research into Victorian England via the Web, the emergence of local bloggers in his neighborhood in Brooklyn and the emergence of the Google Maps API. Basically, you never know where the serendipity comes from.

Fifteen years ago it wasn’t clear that the Web would actually support local, Johnson noted. Futurists speculated we were headed to a “post geographic” age that would make physical location obsolete. In fact, the opposite has happened.

“We failed to anticipate a couple of core innovations,” said Johnson. “GPS and the concept of the geographic Web. We didn’t realize that the Web would enhance geography and that it would solve a problem: figuring out what’s going on in our community.” 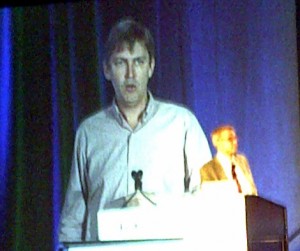