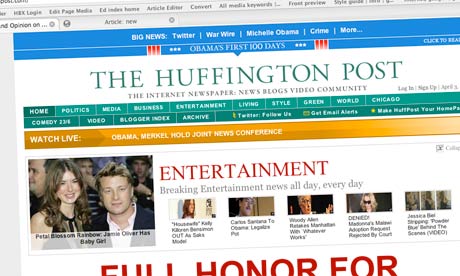 AOL will buy The Huffington Post for $300 million in cash and $15 million in stock, and put Arianna Huffington in charge of the AOL Local sites (MapQuest, Patch, MovieFone) as well as its growing collection of opinionated tech and vertical news properties, such as TechCrunch, Engadget and Popeater. AOL’s vertical sites, such as TMZ.com, run by David Eun — the former “MediaGlow” properties — will continue to be run separately.

The acquisition of The Huffington Post might be seen as the crown jewel of an AOL strategy that has rounded up some of the most provocative sites that bring consumers back to check multiple times a day. The Huffington Post will add its tabloid-like, huge headlines on its front page to AOL’s already successful funneling.

The service relies on the contribution of hundreds of inexpensive-but-often famous contributors who are happy for the exposure. It also relies on aggregated content. As such, HuffPo represents a different view of the industry’s future than Yahoo’s $100 million acquisition of Associated Content, which commissions content based on demand analyzed by search algorithm — although a content farm would fit too. AOL CEO Tim Armstrong was an original investor in Associated Content.

The Huffington Post gets a lot of mileage from its links to pictures of semi-naked women, and its provocative headlines, including, it seems, anything to do with Sarah Palin. It has a tabloid-like appeal and represents a liberal alternative to Fox News on the right. It receives more than 25 million unique visitors a month.

Strategically, however, The Huffington Post is more about its successful verticalization of 25 vertical headings ranging from politics, media and entertainment (the early ones) to newer ones such as green, books, divorce, comedy and college.

The vertical strategy, indeed, was first explored as The Huffington Post began to branch out in local, with city editions developed for Chicago, New York, Los Angeles and Denver. The irony is that local, after a big splash, has been backburnered by HuffPo as it saw a bigger bang for the buck by pushing more efficiently into the other verticals.

Will local become more of a priority under Huffington? It might, in a sideways manner. Editorially, Huffington noted on her site that Patch’s broad scale now provides “an incredible infrastructure for citizen journalism in time for the 2012 election, and a focus on community and local solutions that have been an integral part of HuffPost’s DNA.”

Business-wise, one of the reasons Patch has spent so heavily to launch so many editions so quickly is to scale nationally. That would allow it to heavily market the Patch brand — and attract national advertisers for geotargeting. With a broader collection of vertical content, the branding effort might now be more efficient. But the brand may not be Patch (or MapQuest, or MovieFone) so much as The Huffington Post.