James Moran of the daily deal aggregator Yipit presented this slide at SXSW on Monday and I thought it would be of interest to post it here: 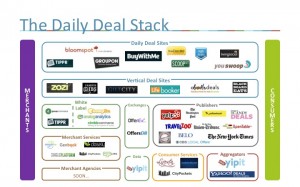 Many layers have formed in the stack between merchants and consumers of Daily Deals. The largest players attempt to serve both merchants and consumers, while new players focus on dedicated constituencies or act as intermediaries. This was inspired by a slide by Terence Kawaja detailing the display advertising landscape, which serves as a useful analogy to how the Daily Deal market is evolving.

When I look at the slide it seems that there’s still a lot of opportunity for plays in the Merchant Services and Merchant Agencies spaces. Providing data to the players, as Yipit is currently doing, also seems like a potentially juicy segment.