Yesterday we wrote about the enhancements to the new Foursquare app (v. 3.0). Today there are new details and screenshots in a Foursquare blog post specifically about the new merchant tools to create and organize specials. Here's what we said…

I recently had the chance to catch up with Gary Rudolph, cofounder of mobile and social app developer Lolay. Rudolph is the former VP of technology for CityGrid where he also worked with cofounder Bardia Dejban. Lolay builds custom apps…

The Scandinavian directory and local search player Eniro has unveiled a pay-per-click advertising network, which it calls Scandinavian Ad Networks. The product leverages traffic from Eniro's own properties (including eniro.se, gulesider.no, krak.dk, and kvasir.no) as well as third-party partner sites…

Cars still need to be sold by salespeople and that never changes. And most people still want to get on the phone to talk to their dealer. What does change is the ability to find cars on the Web, notes…

Mobile now accounts for a third of AT&T’s local search, according to AT&T President and CEO David Krantz, who was speaking at the Borrell show last week in New York. “We truly believe that mobile is bigger than the Web,”…

In the run-up to South by Southwest, we're seeing a land rush to promote cool mobile apps. A top category continues to be location apps, following Foursquare's past SXSW success. This year, the hot new categories will be social sharing…

Just in time for South By Southwest -- a historically significant show for Foursquare -- the company is out with the latest version (3.0) of its iPhone app. Many of the features fall closely in line with the company's comments to us…

I first came across DemandForce because it was popping up in Google Maps a couple of years ago. DemandForce was started in 2003 by Rick Berry and Sam Osman to help dentists and auto shops market themselves online. Today, with more than 7,000 clients across a variety of local service verticals, it is a fast-growing local SMB software service company located in the Bay Area. I caught up with Bonnie Wang, DF’s manager of professional services, at SMX West today to get an idea of DemandForce Connect For Facebook, its recently launched social media service.

DF has three apps that help customers generate more demand from Facebook. People can request an appointment via the SMB’s Facebook page with DF’s Easy Scheduler app. Once a customer makes an appointment, it shows up in the SMB’s DemandForce dashboard and will show the source of the lead. Currently more than 1,000 DF clients are using this app. According to Wang, those businesses that are active on Facebook are seeing the greatest use of the app by customers. 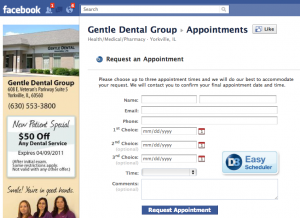 Telmetrics announced today that it has been chosen by Yelp to run the site's call measurement. This includes reporting to advertisers the volume of calls they received through the site (involving unique tracking numbers). According to the press release: Telmetrics’…

The Wall Street Journal reported this week that AT&T Interactive will join the growing list of directory companies to launch a daily deal site. AT&T Interactive CEO David Krantz told The Journal that he believes AT&T could be "fast followers"…

From the Friday parody department, we already have a few iPad2 spoofs out. Below is the video from JLE, quickly making a name for itself for mockumentary-style videos of Apple's promos (the real promo video is here). Conan O'brien was…

You've probably heard by now that AOL has continued its content acquisition streak by acquiring hyperlocal news and blogging network Outside.in. Outside.in will beef up Patch's hyperlocal content and also its team, as it continues the ambitious plan of cracking…

On the blog this week, Mike B. noted that Google Hotpot had added new social features to Google Maps for Android, other platform to follow. Hotpot users can now tweet their GOOG Places ratings and reviews on Twitter, or ping…

In the previous post we mentioned the growth of Android as a proxy for decisions to develop for the platform first (or exclusively). It's no secret it has the greatest momentum and some research firms have already pegged it as…

Google's Hotpot was a notable product launch that got lots of attention in the tech press and analyst corps, but hasn't yet generated the mainstream attention it deserves. That should change, and especially when it finds its true calling in…

Not sure it's the right audience, but this tweet by the Red Cross is now the top tweet for #TigerBlood. I give them a Type A for creative use of current events to increase awareness. Can your business ride @CharlieSheen…

Many of you no doubt heard that the new iPad2 was just unveiled. The invitation for the press event made no secret that it was an iPad related announcement (a giant “2” signified the date as well as “iPad2”).

One surprise, however, was the appearance of Steve Jobs mid-sick leave. He started out with some general stats around Apple products that were positioned as the “post PC blockbusters” (iPod, iPhone, iPad). Here are a few numbers announced:

On to the main event: 2010 was positioned as the year of the iPad. But 2011 so far has been the “year of the copycats,” including HP, Samsung and Android (ouch!). Still, Apple sold 15 million iPads in 2010, accounting for $9.5 billion in revenues and a 90 percent market share.

Now to once again set the bar is the iPad2. The impressive list of new features includes:

One of the slides we presented at last week’s Social Local webinar was from my Local Reviews Ecosystem post. We sped through it and given the brouhaha that has been bubbling up between Google and reviews sites like Yelp and TripAdvisor over the past year, I thought it might be of interest to repost it. 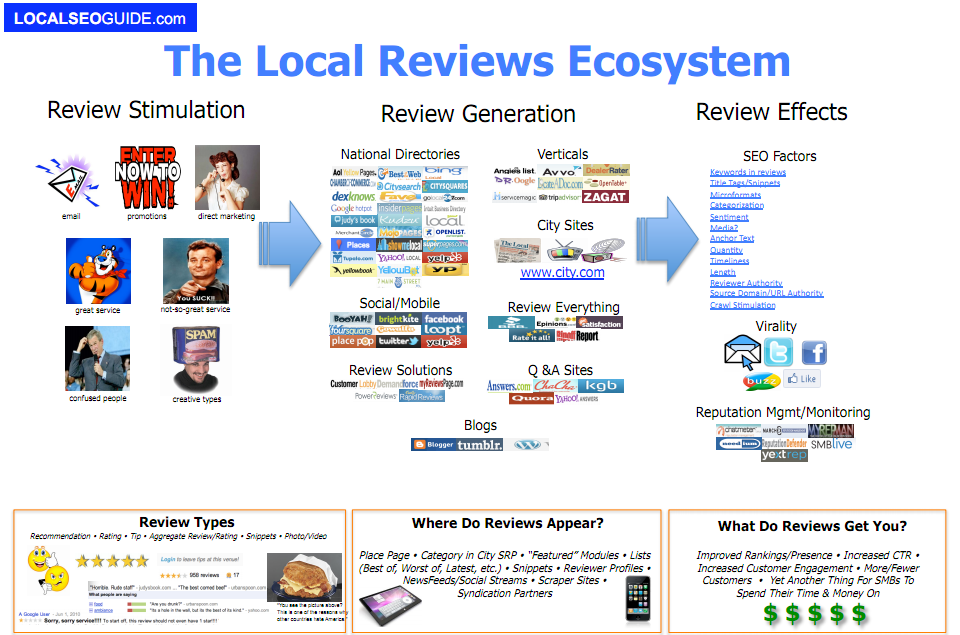 As I mentioned in the earlier post, in my survey of 20 SMB SEM consultants about their top social media client priorities for 2011, review generation and review management was by far the highest on the to-do list.

As you can see from the infographic, the ecosystem is complex, just like the entire local search ecosystem is complex — David Mihm’s chart on how local search services are connected deserves to be included in a Where’s Waldo book. But within that complexity lie amazing green fields of opportunity for innovation. Some thoughts on how you might approach the sector: