TVplus CEO and Founder Ajay Shah argues that in spite of connected TVs, cross-platform video and “TV Everywhere” types of viewing options for connecting to video, it will be the “second screen” that will drive the social revolution that links real-time viewing with an online social experience.

BIA/Kelsey drilled down on this viewpoint with TVplus Marketing Director Matt Duffy following up on conversations we started at last week’s Social TV Summit that we blogged about earlier.

TVplus currently exists as an offering of Spot411 that was released to the Apple Store as an iPad app just last week. It is free to download and provides value-added second screen content designed to engage the viewer and enhance the overall viewing experience both for the program and for accompanying advertising. This will include typical social tools like sharing and liking. 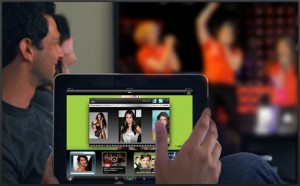 For example, if a TV character appears on the first screen, on the TVPlus-enabled iPad, one of the windows appearing might be the Internet Movie Database (IMDb) record for that character. If a Ford ad is on the first screen, the TVplus screen can show additional details about the car model and as a connected device, support direct response for any call to action.

TVplus plans to expand by 4Q2011 to laptops and PCs and to Android and iPhone in 2012. It is in Series A funding right now and actively seeking partners. The five broadcast networks (ABC, CBS, FOX, NBC and CW) have engaged with TVplus to support their 8 p.m.-11 p.m. primetime lineup beginning last week. [Updated Aug 3, 2011]

TVplus started supporting  the programming from the five broadcast networks (ABC, CBS, FOX, NBC and CW) from 8pm-11pm in mid-July. As Duffy explains TVplus adds value to the viewing experience by, “creating a companion content experience around the primetime programming of these five networks with our own resources, helping viewers make the connection with a number of publicly available content outlets while they watch.”

More is in store for the fall and beyond including new season premieres, football and even presidential campaign coverage.

TVplus is working with a half-dozen major brands in different verticals including CPG, banking and automobiles to develop synched second screen content. Both program and advertising content is developed and linked using the TVplus Parallel Editing Tool (“PET”). TVplus packages its own content for the app from third parties and the networks, advertisers and content owners may also create content.

At the moment, TVplus is focused on national programming and brands. However, cable MSOs have already asked about local opportunities to tie in, say, a national Ford commercial to a local dealer. This is possible and may roll out in 2012 depending on demand.

How does the market view TVplus? Duffy says this happens typically through one of three lenses. Digital teams want to put TVplus into the ad paradigms of gross impressions, clickthrough rates and other response metrics. The social teams are more interested in seeing comments generated, assets shared with friends and driving engagement outside the current experience. Finally, ad networks are interested in the ability to synchronize ads to specific content in non-real time.

TVplus can take this model to the local market. It has access to a database of local commercial audio signatures as well as national ads so it can also offer user metrics on ad engagement. Duffy says the company may target five to 10 DMAs in 2012 to test the waters in local markets.