Jason Angelides, OneTwoSee‘s COO and cofounder, told us this second-screen start-up positions itself as a B2B play designed to augment and enhance the first-screen experience by adding social, data and interactivity. Angelides and CEO Chris Reynolds left Nokia/Navtaq last summer to found OneTwoSee and closed on the first $1 million in funding last December. This funding will be used to build out staff, currently fewer than 10. Based in Philadelphia, OneTwoSee’s content focus has been sports, beginning with its local MLB Phillies team. It will be expanding to live news. Its business model is to target affiliates of the broadcast networks and add value to their local news and sports coverage. OneTwoSee’s revenue model will begin with a revenue split on second-screen ad sales, but as it gets more distribution, it will sell its own inventory. 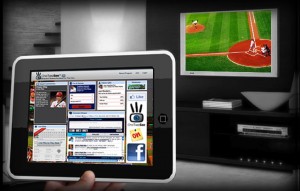 As Angelides describes it, there are three key functions required to make the second-screen experience successful from a business viewpoint. First, the social aspect must allow viewers to share likes and content, connect to other viewers, and send tweets. Another social function is to connect viewers and brands. Second, the data function must feature live or near-live data feeds to make the experience compelling. This can be sports data but also live news feeds. Third, and the hardest thing to do well, is interactivity. At a minimum, this can be broadcasters reading Facebook feeds and Twitter tweets over the air. Having the secret sauce in interactivity is what will differentiate the different start-ups in the second-screen space.

Angelides believes OneTwoSee can differentiate itself by going after the “big players” with its educational/consultative focus. The local network television station affiliates don’t seem to get top of mind when it comes to new media deployments. OneTwoSee believes therein lies its opportunity. “Local affiliates often are an ignored group,” Angelides argues. “While they know there’s no silver bullet, they also don’t necessarily know what to do.” OneTwoSee’s strategy is to secure partners by becoming trusted advisers and keeping this trust by providing services for a fair and reasonable price.