The website development firm vSplash is playing in a fertile field with its Buzzboard product, a tool that enables local media salespeople to use the quality of small business digital presence as a starting point for a sales conversation.

The folks at vSplash recently gave us a demo of the tool, which is loaded onto a tablet for outside sales or desktop for inside. BuzzBoard does many things, but the core feature is that it quickly enables a pretty sophisticated analysis of an SMB’s web presence, looking at a range of criteria, including the quality of the site, its SEO, whether it meets search engine requirements for indexing and so on. Armed with only a business URL, the vSplash tool can run a pretty thorough website audit in about three minutes.

Taking this analysis, BuzzBoard can build proposals that allow the rep to pitch a solutions, whether customized or packaged, that addresses the performance of that advertiser’s digital presence (this includes websites, social presence, listings and so on). it also enables a competitive analysis, for example showing a furniture store the relative quality of its nearest competitors’ web presence.

Local traditional media sales channels are increasingly desperate to steer sales conversations away from a defense of their core media product — Yellow Pages for example — and toward something more engaging to the advertiser. One way is to turn the conversation into a discussion of guaranteed performance (leads). Another approach is the one vSplash is advocating, build an evaluation of the businesses’ digital reputation or the quality of its digital presence and use that as the entry point to the conversation. In this context, it’s no surprise that vSplash reports generating strong interest among some of the major U.S. publishers, though the company has not yet announced a deal for the sales tool.

The other key industry theme vSplash hopes to leverage with BuzzBoard is the need to boost rep productivity. Estimates vary but typically, sales rep spend well under 30 percent of their time in front of customers. A recent online survey of sales reps conducted by BIA/Kelsey and Hawthorne Executive Search, for example, placed the figure at 27 percent. Adding one more customer interaction per selling day could have a material impact on sales results. Tools like BuzzBoard offer the opportunity to reduce prep time, which is one key to improving rep productivity.

BIA/Kelsey is partnering with vSplash on the SMB DigitalScape product, which uses the BuzzBoard technology. SMB DigitalScape enables users to analyze the performance of an SMBs digital presence, as well as providing aggregated data on the performance of SMB web presence across 50 parameters, ranging from the quality of SEO hooks to social presence to use of specific features like video. 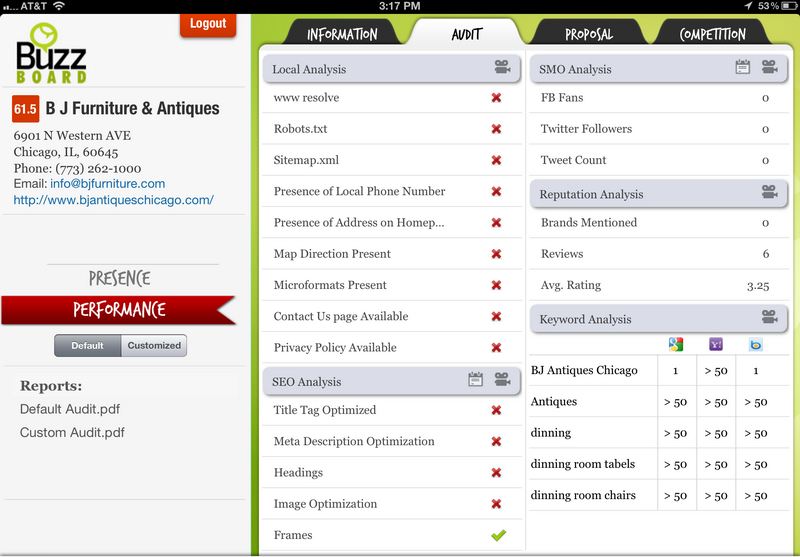