As widely expected, we have a new iPhone. Unlike the naming convention across Apple’s product line (most lately the iPad), the company is sticking with the numerical-based system. So we now have an iPhone 5.

Also widely expected in the most leak-filled product launch in Apple’s history are the following specs:

— Bigger, 4-inch diagonal screen
— New design:18 percent thinner (7.6 mm) and 20 -percent lighter (112 grams)
— The white version has a raw aluminum back. The black one has the black anodized backing.
— Retina display at 326ppi
— Longer screen means 5 rows of icons
— Old apps will run letterboxed, and developers can quickly update their apps to the new aspect ratio
— 44 percent better color saturation
— Single chip for voice and data and a number of connectivity stndards GPRS, EDGE, EV-DO, HSPA, HSPA+, DC-HSDPA and LTE  (Sprint, AT&T and Verizion in the U.S.)
— A6 Chip: 2X faster CPU 2x graphics compared to the A5
— Stronger battery: 8 hours of 3G or LTE talk time or browsing. 10 hours on WiFi browsing.
— Improved camera, based on iSight: 40 percent faster image capture and native panoramic capability
— 3 microphones for a wider spectrum of audio
— New dock connector to replace the 9-year old 30 pin connector. It’s 80 percent smaller and based on a new standard will be called Lightning (to match the “thunder” connection standard in mac products)
— No NFC

But more than the gadgetry, what will end up having a greater impact are many of the implications behind the launch of iOS6 (previously announced). That includes things like deeper Facebook integration for app developers to build in authentication and Open Graph tie-ins.

Other iOS6 highlights include:

For me the greatest impact will end up coming from what happens with Apple’s new mapping app which replaces Google’s longstanding default positioning in that role. Apple is great at product design (both hardware and software), so it should have a nice UI.

This will especially be brought out by the new aspect ratio that allows for larger maps and better landscape viewing. One example of the better app design capabilities shown at the lauch was restaurant images as part of the OpenTable app experience (see below). 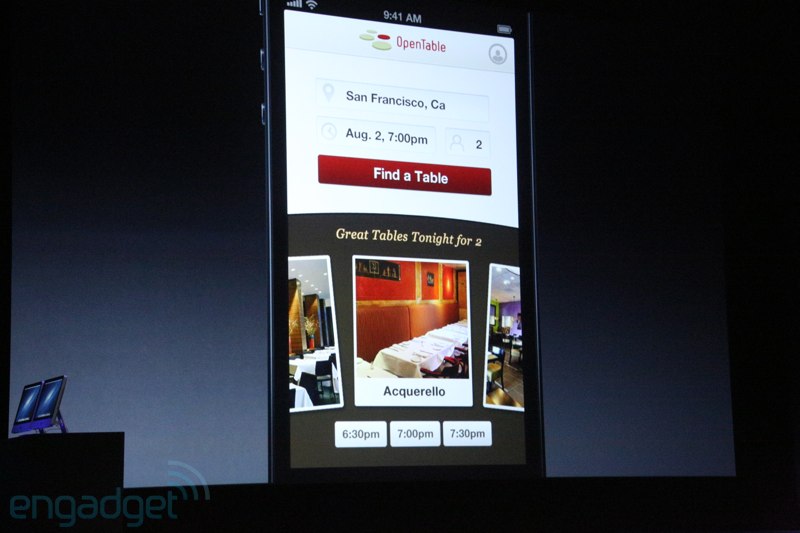 However one thing Apple could underestimate is the utility that’s a function of the local database and search algorithms that govern delivery of  local results. That is certainly new territory for Apple, and it’s currently cobbling together a siloed list of content partners like Yelp and Waze.

Interestingly, this is yet another area where it butts up against Google.  And all of this will meanwhile have a considerable impact on Google’s leading position in mobile advertising. Google now has close to 60 percent market share of U.S. mobile ad revenues.

It owes much of this to default search positioning in iOS’s Safari browser (still in tact). Though Android is growing in hardware market share, iOS still has greater engagement levels. As one corollary, iOS has a higher share of ad impressions according to Millennial Media.

So that default search positioning matters greatly for Google. And in the world of local search, that same concept applies to Google’s default mapping position (though under monetized).  We’ll have to see how the loss of that position affects local search query volume for Google.

This comes down to the question of how much local search query volume is happening via Google’s mapping app versus in-browser, especially in the iOS environment. That’s an entirely separate analysis which I have some background data on and will explore separately.

For now consider it a big hit to Google, which will likely launch a third party mapping app (like it just did for YouTube, following its ejection from iOs default apps). If the above speculation about Apple’s inferior algorithms and data ring true, it’ll certainly help Google regain ground.

However much more can be said for that default on-deck positioning, which is sadly a larger success factor. There are lots more implications here, which we’ll cover here and in seven different sessions i’ll be moderating between our SMB show and the EASDP show in Spain. Stay tuned. 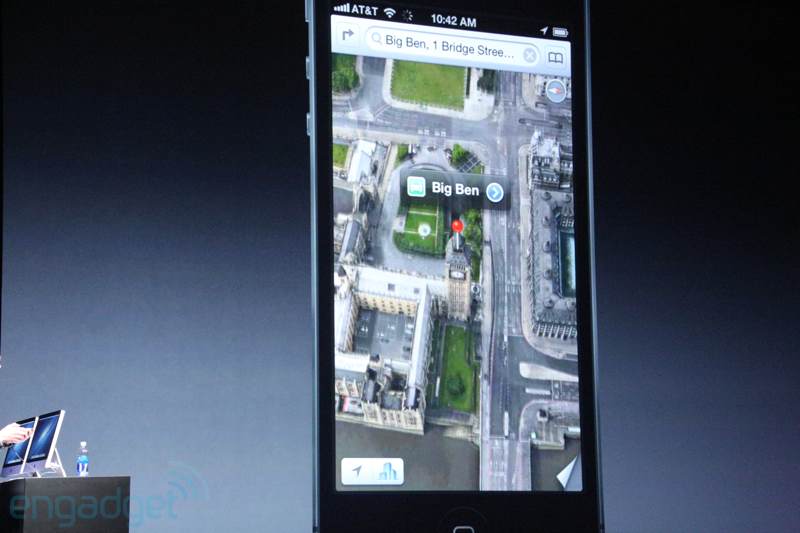