Today we release the first in a series of local forecasts across BIA/Kelsey’s local media coverage areas. The first out of the gate is mobile, a sector whose collision with local continues to receive lots of innovation and investment.

Here are some of the highlights:

— Consistent with our classification of local media across categories, this is defined as advertising that is targeted based on a user’s location (much more nuanced in mobile).

— This share increase will come about as brand advertisers increasingly evolve their campaigns to the realities of mobile usage (50% of mobile search is local); and the native capabilities of the device (i.e. location targeting).

— Resulting ad volume growth will be compounded by premiums that develop for location-targeted ads — a function of higher performance that’s already evident through data shared by mobile ad networks.

— This performance is in turn due to higher relevance, immediacy and consumer buying intent, all of which are more prevalent in mobile than in many other print and digital media.

This has so far mitigated the revenue opportunity for app publishers and developers — while advertisers are in a better position with access to undervalued inventory. We believe this will turn around for lots of reasons.

These include advertisers’ trailing movement towards user behavior and undervalued inventory. There’s also high performance for location targeted mobile advertising that will boost advertiser demand in a slow but inevitable market education process.

Stepping back from locally targeted mobile advertising, the overall mobile advertising outlook is important too (it includes local). The data continue to see proof points such as Google’s $8 billion mobile run rate announced after our calculations.

This global run rate includes some non-advertising revenues such as Google Play Store. So segmenting out the U.S. advertising portion and considering Google’s share of the U.S. mobile ad market (50 – 60%), our 2012 figure of $2.7B is congruent.

Meanwhile there are lots of other segmentations of U.S mobile ad revenue, such as ad formats (search, Display, SMS, video, etc). Much of that is tied to changing development standards and platforms, such as apps vs. mobile web.

We’ll save all of that for future discussion. Meanwhile reach out to me (mbolandATbiakelsey.com) or my colleagues any time for questions or interest to engage over any of the above. We’d love to hear from you. 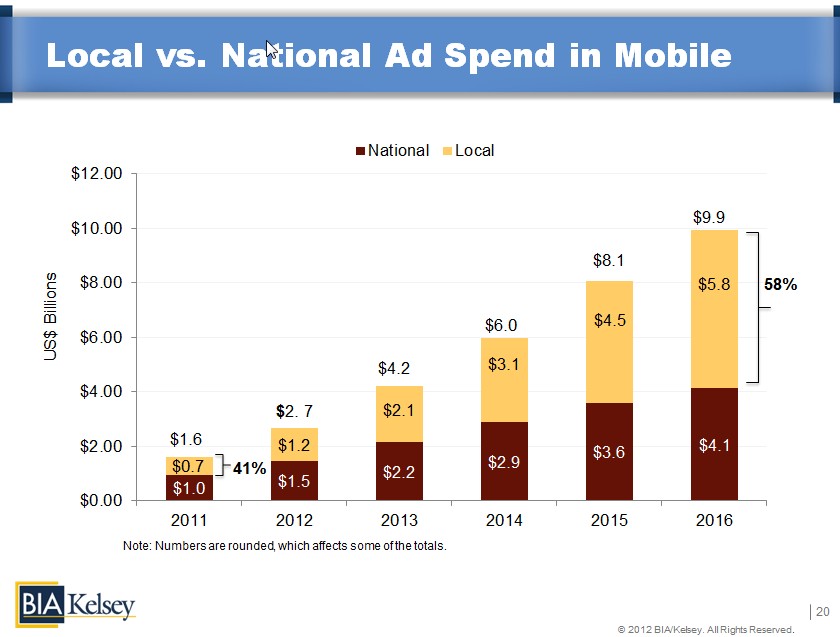