Disruption happens. In the local space, we’re seeing it happen with Yellow Pages and newspapers. Banks are seeing it happen as well, which will cause a major change in the way that customers keep track of their money, buy goods and services and stay “loyal” to merchants.

At NACHPA’s Payments 2013 in San Diego this week, speakers discussed how the move to digital is impacting banks and their relationships with customers and merchants – and how the payment space is evolving.

Keynoter Brett King, CEO of Moven,, an online bank. suggests the biggest sea change is that customer relationships aren’t determined by anything that goes on at the branch. “Nine of 10 customers can’t remember getting advice at a branch,” he notes. “By 2015, digital interactions with banks will outnumber branch interactions by 300 to 1.” And branches will only be visited once a twice a year.

“The mobile phone is undoubtedly the next banking platform,” says King, citing a Gartner forecast showing that 70 percent of GenY will be “mobile banking first” by 2015, and that 50 percent of all customers will be using mobile as their primary channel by 2016.

Smart accounts are about putting context in payments – good spending versus bad spending. It might show, for instance, that the daily $10 Starbucks fix is adding up to $280 a month. “Instead of making it an impulse decision, make it into a planned purchase,” he says.

“It is all about getting rid of friction,” adds King. The correct analogy is Uber, which provides cashless car service. By linking payment accounts and wallets to the cloud, merchants are increasingly positioned to add offers, loyalty programs and other incentives.

Banks, however, haven’t reduced friction with their online products. “We have simply reinforced it online,” says King, in words of warning. “We haven’t seen the industry embrace mobile as the bank account.” Meanwhile, there are “a lot of players coming in to create new infrastructure, with new rails, new pipes.” 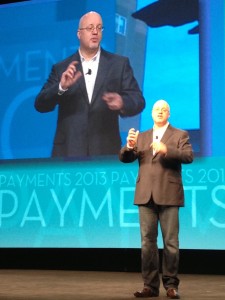