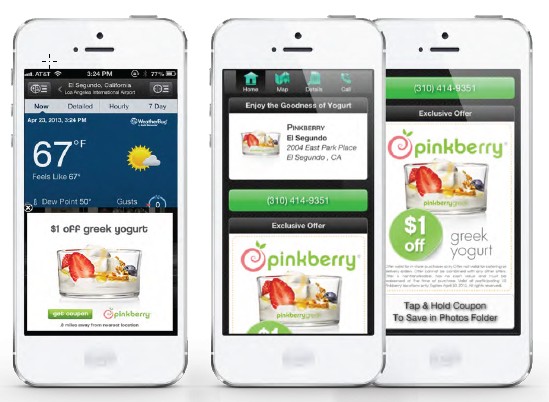 Can the state of mobile advertising be indicated by the stock price of some of the industry’s leaders? Google and Facebook — the top two market share leaders — have faced some investor unease due to users flocking to a touch point that is under-monetized. Cue the Mary Meeker slide mobile showing usage outpacing advertising.

That’s since been alleviated to some degree for Google by enhanced campaigns and growing mobile CPCs. And for Facebook, it silenced critics during its Q2 earnings call when it proved that mobile sponsored stories are finally bearing fruit – to the tune of 40% of ad revenues. The stock price got a healthy boost.

Then you have companies like Millennial media whose volatile stock activity can be interpreted in mobile advertising’s slower than expected adoption; and in some advertisers’ disappointment with performance of mobile display. But is this because mobile display as we know it might be the wrong format?

As we discussed in our recent mobile advertising paper, that includes not only targeting where the ad shows up but what it includes — things like proper calls to action and locally relevant ad copy. It also requires measuring the right things and weaning off the CPMs and reach based metrics that are the currency of Madison avenue.

We’re getting there with the work of companies like xAd, Verve, Placed and some of those mentioned above. I took a look at the state of the union and some examples in my Search Engine Watch column this month. Check out an excerpt below and you can read the entire thing here.

We’ll also unpack all of this further this week at our SMB Digital Marketing conference in Austin. Hope to see you there.

The excitement and attention paid to mobile local search continue to ratchet up. But we still haven’t seen the equivalent ad dollars follow. Mobile local search is now $1.3 billion in the U.S., according to BIA/Kelsey, but that pales in comparison to the overall $132 billion local ad pie.

In supply and demand terms, that has led to an oversupply of ad inventory (represented by the usage) relative to demand (ad dollars). This has kept mobile ad rates depressed, which is great for early advertisers who get undervalued ad inventory. But it isn’t so great for mobile publishers and media companies looking to monetize mobile apps and sites.

This is one reason behind Google’s enhanced campaigns, which have gotten lots of coverage here on SEW, including a few of my previous columns. Pushing more advertisers – especially SMB laggards – into mobile will improve these supply and demand economics that have erstwhile tempered mobile search’s revenue potential. We’re already seeing higher CPCs.

But there are other factors contributing to advertisers’ slow adoption of mobile; and in publishers’ sometimes disappointing results with mobile monetization. Equally in search and in other forms of mobile advertising (display and rich media), this results from mobile publishers, advertisers, and ad networks simply measuring the wrong things. In other words, campaign objectives, ad targeting strategies, even ad copy, are misaligned.

There’s a certain desktop way of thinking that has plagued the mobile ad environment in its adolescence. That’s opposed to the native and “ground up” thinking required for an inherently different form factor, use case, and content delivery paradigm.

It isn’t the first time that’s been said, but we’re seeing new evidence of its effect, and a greater demarcation of campaign strategies. There are lots of KPIs supporting winning strategies such as ad performance and logical ROI assessment. But another correlation that hasn’t really been explored is mobile company valuations.

Pre-enhanced campaigns, Google’s stock price was shaky due to CPC declines. Those resulted from a continued user migration to mobile where bid pressure and CPCs are lower. Facebook faced something similar – at least before its recent Q2 earnings announcement when it proved that a more native mobile ad strategy was finally bearing fruit.