BIA/Kelsey is releasing its latest State of the Industry report, “Local Radio Stations Profiles and Trends for 2014 and Beyond.” In it, BIA/Kelsey projects that local radio will maintain its fourth place position in the local ad market in 2013, as shown in the chart below. 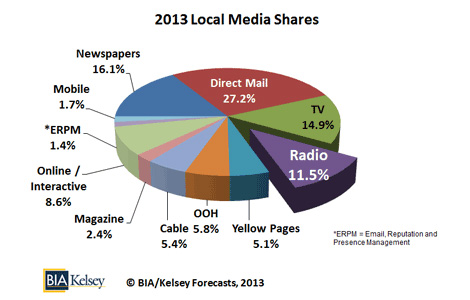 BIA/Kelsey defines that local media marketplace as all local media/services that provide access to local audiences. In other words, it includes all of the media that local radio stations compete against for national and local advertising spending in their markets. The total spending for all of that media for 2013 is estimated at $132.7 billion according to BIA/Kelsey. BIA/Kelsey is forecasting that local radio stations will receive 11.5% of all advertising revenue spent in local markets in 2013, placing it fourth behind direct mail (27.2%), newspapers (16.1%) and television (14.9%).

Advertisers who do use radio as part of their advertising mix are generally quite pleased with the results they get from that advertising. In BIA/Kelsey’s annual Local Commerce Monitor (LCM) survey on advertising and marketing of small and medium businesses (SMBs), we ask several questions on the satisfaction of the various advertising and marketing choices made. For the group of businesses who do advertise on radio, 36% rated the perceived ROI of radio advertising as either excellent (10-19 times return on that investment) or extraordinary (over 20 times the return). 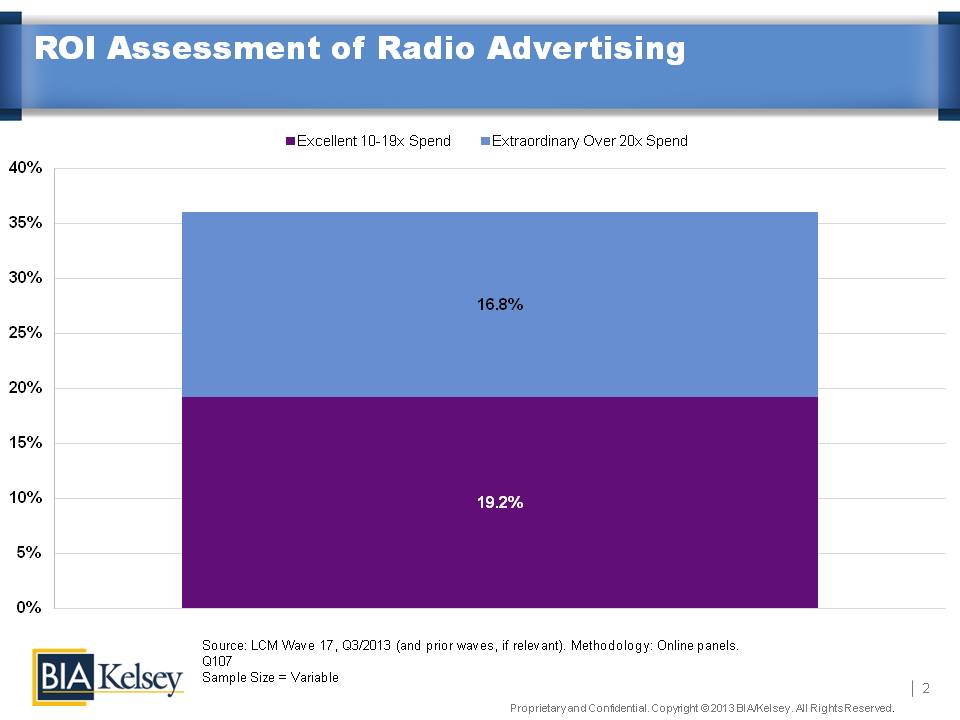 The radio industry is facing ever increasing competition from new and innovative digital media outlets that are available to local and national advertisers. At the same time, listeners have alternate ways to receive their audio entertainment programming, news and information — satellite radio, internet radio sites, iPods and MP3 players to name a few. While the audiences attracted to local radio stations are getting smaller, annual revenues are still increasing, albeit at rates much lower than historical averages.

BIA/Kelsey’s State of the Industry report also looks at which format categories have increased their revenue share over the past 12 years and which have seen declining revenue shares. Spanish language stations have seen the largest jump in revenue share in 2012, more than doubling their 2000 share as the Spanish population has continued to grow and advertisers are seeing the value in reaching this audience. Sports, which appeals to the popular Men 18-34 demographic, saw the next largest increase. Adult Contemporary (AC) stations not only had the highest revenue share in both 2000 and 2012, it saw the third largest increase. So who were the biggest losers among format categories from 2000 to 2012? Easy Listening saw its revenue share plummet from 4.3% in 2000 to 0.2% in 2012, losing more than 95% of its revenue share. Other hard hit format categories were Talk and AOR/Classic Rock.