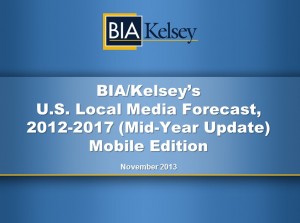 One important slice of this forecast is the location targeted ad revenues attributed to mobile. That’s of course a small but quickly growing segment. In addition to these location targeted mobile revs, we panned back to look at the overall U.S. mobile ad revenue picture.

Interestingly, location targeted mobile ad revenues will grow to 54 percent of overall mobile revenues by 2017. This is driven by many market forces we examine in great detail and from discussions with industry players. We also break down revenue by format such as search and display.

The forecasting process is a doozy but we get bulletproof results and valuable findings. We’re looking to continue our streak of accurate numbers — affirmed in retrospect — for the past 5 years of looking closely at the mobile ad opportunity, not to mention decades covering local media.

The mobile exec summary is below, and BIA/Kelsey clients can log in to download the full report. Anyone else interested in finding out more can email me at mbolandATbiakelsey.com. We’ll also discuss these findings in greater depth next month at our Leading in Local conference.

— To understand the localized portion requires first panning back to the total mobile ad revenue picture. Here, BIA/Kelsey projects revenue to grow from $3.65B in 2012 to $20.68B in 2017. This projection has increased from our previous forecast (March 2013).

— Increased projections result from guidance from mobile ad networks and ad share leaders such as Google (33% of paid clicks now come from mobile devices); and Facebook (49% of ad revenues attributed to mobile, up from 23% in March).

— Google’s Enhanced Campaigns*, launched in July, will compound these factors by forcing mobile ads on search advertisers (default campaign inclusion). This will accelerate a mobile advertising learning curve and adoption cycle for all search advertisers, including SMBs.

— This will play out as an influx of advertisers in Google’s bid marketplace for mobile keywords will naturally boost bid pressure and thus CPCs. There is shift is already underway, evidenced by data shared with us by search marketing agencies.

— Other important factors driving this localized share include the adoption of mobile local advertising tactics (i.e. geo-fencing, click-to-call, click to map) by national advertisers, who account for most U.S. mobile ad spending.

— SMB adoption — a slow but growing share of localized mobile advertising — will likewise impact its growth. 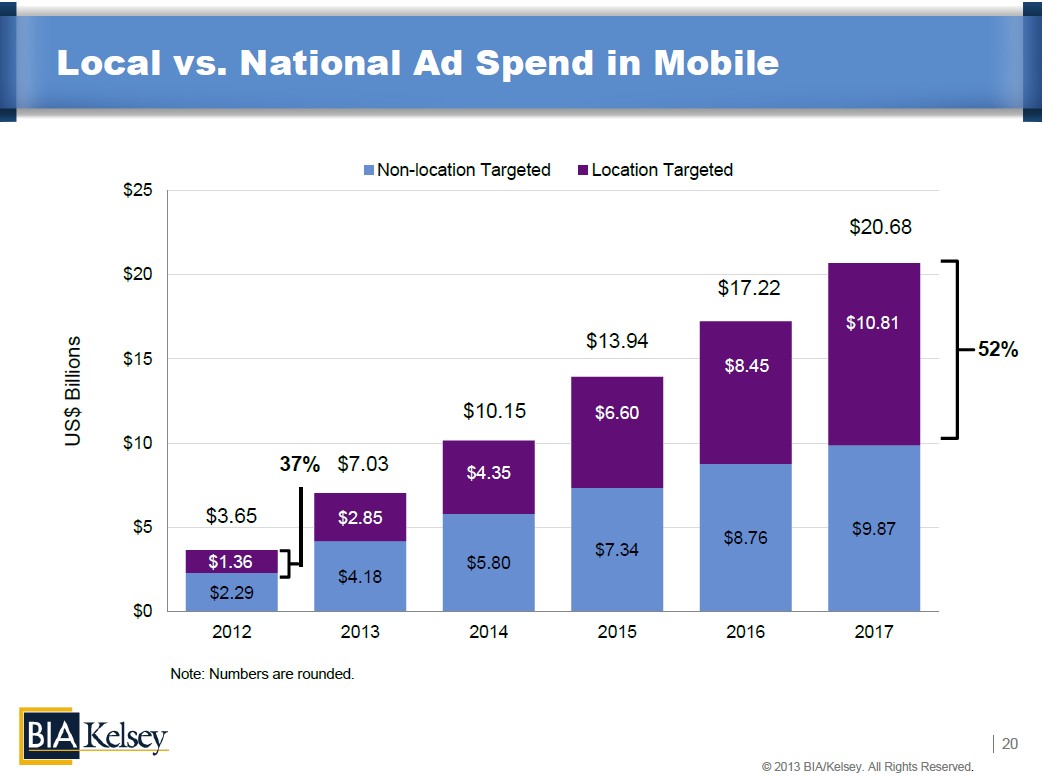