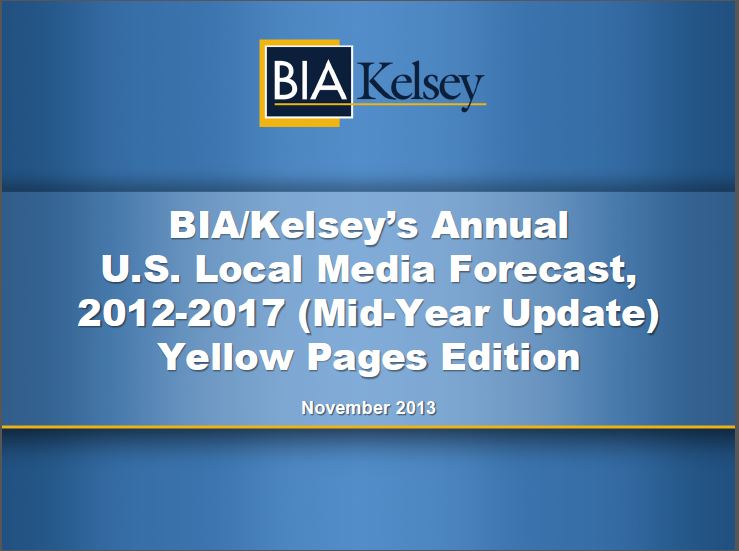 A key transitional milestone for the U.S. Yellow Pages industry — becoming a majority digital business — is about two years away, according to an updated BIA/Kelsey forecast released today.

The forecast, which builds on the 2012-17 forecast released in April, projects the U.S. Yellow Pages industry will cross over into majority digital status in 2016, with $2.7 billion of $5.3 billion total revenue coming from non-print sources. By 2017, BIA/Kelsey expects the projected $5.1 billion U.S. Yellow Pages industry to be 56 percent digital.

Most of the digital growth in the U.S. Yellow Pages market will come from non-IYP products and digital services — including search engine marketing, digital presence products and reputation management. Mobile is also expected to be a significant growth driver.

The U.S. Yellow Pages industry actually lags many global markets in the transition to digital, at least as measured by share of revenue from non-print sources. Several European markets have already passed the majority digital milestone, including Belgium, France, Italy, Sweden, Norway, Denmark and others.

In some instances, directory publishers are already well into operating as true post-print organizations. The best example of this is the Nordic directory company Eniro, which announced on its recent Q3 earnings call that it will phase out its regional print Yellow Pages product in Sweden, essentially drawing the print era to a close in the Nordic markets. Eniro will continue with its small but viable local print directories business, which operates as a separate business unit.

You can learn more about BIA/Kelsey’s U.S. and Global Yellow Pages forecasts by visiting our website.