Google is testing a new advertising feature that bridges the gap between people who have visited brands’ websites via desktop with advertisements on their mobile devices, and vice-versa. This comes at a time where Desktop search in the US is poised for a significant decline this year and paid clicks on Google shift toward mobile devices, according to a new eMarketer study. Some of the highlights from that study include:

So this cross-device targeting is a important initiative at Google because people are shifting between their mobile phones, tablets, and desktops, and the primary means of tracking web browsing, the cookie, has limited functionality on mobile. 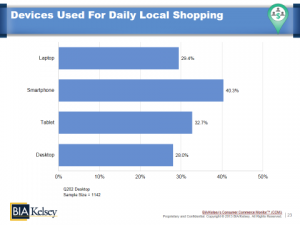 Advertisers are responding to consumers’ rapidly increasing time spent with mobile phones and tablets and the usage shift to mobile. Search inside mobile platforms don’t leverage cookies as effectively so something new like this is needed. This will help better monetize mobile app ad inventory.