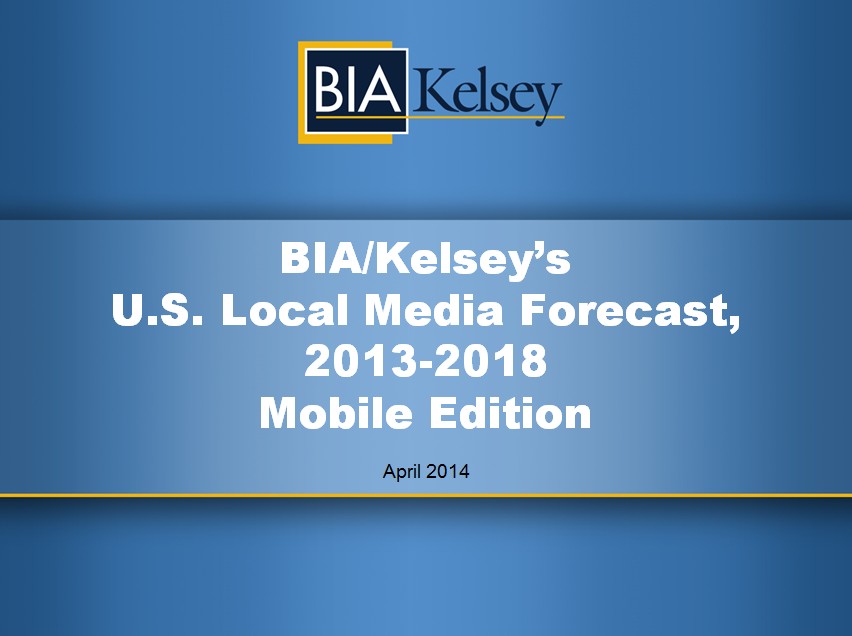 It’s that time of year again; BIA/Kelsey’s spring release of its local media forecast. This is broken down into its media components, such as Online, TV, Yellow Pages, Mobile, etc… The full forecast will be out in a few weeks. Today we release the first component: Mobile.

Part of the Executive Summary and charts are below. The top-line takeaway is overall U.S. mobile ad revenue growth: $7.2 billion last year to $30.3 billion by 2018. That includes search, display, SMS, video and native social (i.e. FB news feed ads). The latter caused us to dial figures up from last year.

Zeroing in on the forecast’s main theme of location targeted mobile ads, those went from $2.9 billion last year to $15.7 billion in 2018. That makes them 40 percent of overall mobile ad revenues, growing to 52 percent in 2018. There are lots of reasons for that, some of which are outlined below.

Lastly, it’s notable that this forecast release coincides with today’s IAB release of prior year online and mobile audits. It’s good to see accuracy in their figures, especially the mobile numbers which I believe due to parity with the figures I devised. Their $7.1B is just shy of our $7.2B.

To engage over these numbers or for a full copy of the forecast, email my colleague Steve Passwaiter. And we’ll be discussing these figures in greater depth during our Leading in Local conference next month in Atlanta. Email me directly for a discount code at mbolandATbiakelsey.com.

— To understand the localized portion requires first panning back to the total mobile ad revenue picture. Here, BIA/Kelsey projects revenue to grow from $7.2 billion in 2013 to $30.3 billion in 2018. This projection has increased from our previous forecast (November 2013).

— Increased projections result from guidance from mobile ad networks and ad share leaders such as Google (33 percent of paid clicks now come from mobile devices); and Facebook (53 percent of ad revenues attributed to mobile, up from 23 percent last March).

— Google’s Enhanced Campaigns*, launched in July, will compound these factors by forcing mobile ads on search advertisers (default campaign inclusion). This will accelerate a mobile advertising learning curve and adoption cycle for all search advertisers, including SMBs.

— This will play out as an influx of advertisers in Google’s bid marketplace for mobile keywords will naturally boost bid pressure and thus CPCs. There is shift is already underway, evidenced by data shared with us by search marketing agencies.

— Other important factors driving this localized share include the adoption of mobile local advertising tactics (i.e. geo-fencing, click-to-call, click to map) by national advertisers, who account for most U.S. mobile ad spending.

— SMB adoption — a slow but growing share of localized mobile advertising — will likewise impact its growth.

— For national brand advertisers, the shift to location targeted mobile advertising will be driven by their natural evolution to adopt effective, increasingly available, and currently undervalued mobile local ad inventory.

— Innovation among ad networks and ad tech providers (e.g., Enhanced Campaigns) will provide additional incentive and impetus for this transition.

— However, SMB-driven growth is expected throughout our forecast period due to evolving SMB savvy and growing propensity to self-serve with offerings like Google AdWords and Facebook (pull).

— Also at play will be the accelerating mobile innovation, sales and bundling efforts of local media companies (push).

— As an example of the push paradigm, Yelp last month partnered with YP. The publisher’s 4,000 local sales reps will now be armed with Yelp advertising packages, which include mobile presence and distribution. 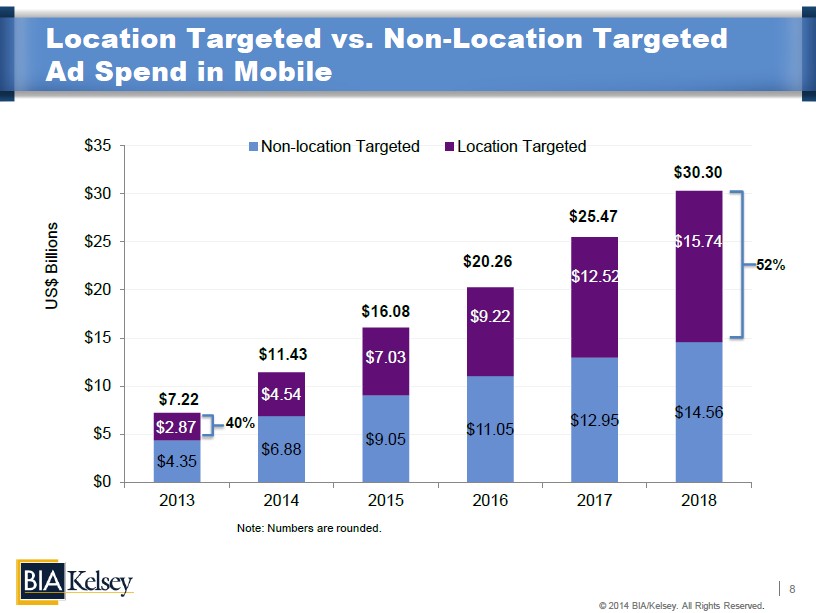