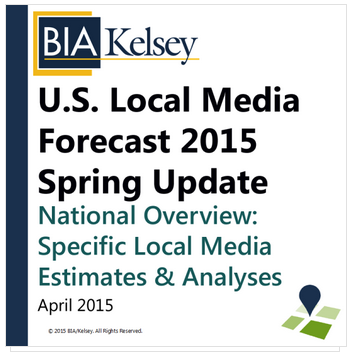 U.S. mobile ad revenues will grow from $13.3B last year to $42.4B by 2019. That’s according to BIA/Kelsey’s latest Local Media Forecast, released last week. The forecast is broken down into media such as online, television, and YP. Today we highlight the mobile piece.

The mobile projections above include search, display, SMS, video and native social (i.e. Facebook news feed ads). The latter are the fastest growing mobile ad format. It’s also important to note that these figures do not include tablets (for reasons mentioned here).

In addition to ad formats, the mobile ad pie can be segmented by targeting scope: Location targeted mobile ad spend will grow from $4.3 billion last year to $18.2 billion in 2019. That equals about a third of overall mobile ad revenues, growing to 42 percent by 2019.

Drivers for this growth include mobile usage (which skews towards local intent) and advertiser evolution to follow that usage. Another important factor is the premiums associated with location targeted ads, which result from performance and growing demand.

We’ll release more data soon that drills down further into the mobile numbers and many inputs. Also expect more from the forecast’s other media types as we unpack them here and at upcoming conferences. Meanwhile the mobile highlights are below.

— U.S. location-targeted mobile ad revenues are projected to grow from $4.3 billion in 2014 to $18.2 billion in 2019 (34 percent CAGR).
— This is defined as mobile advertising targeted based on a user’s location; or including proximity-relevant content to trigger local offline conversions.
— It includes large national advertisers and SMBs.

— Localized mobile ad share will also grow as a result of premium ad rates.
— Premiums will result mostly from higher performance (i.e., CTRs, phone calls, store visits).
— Performance deltas are in turn a function of:
— Higher relevance, immediacy and alignment with consumer local buying intent, all of which are more prevalent in mobile than in other digital and print media.
— For example, half of mobile searches have intent to find local information or products, compared to the 20 percent of desktop searches that carry comparative local intent.
— Advertisers increasingly include calls-to-action to capture this high local intent (i.e. in-unit click-to-call buttons). 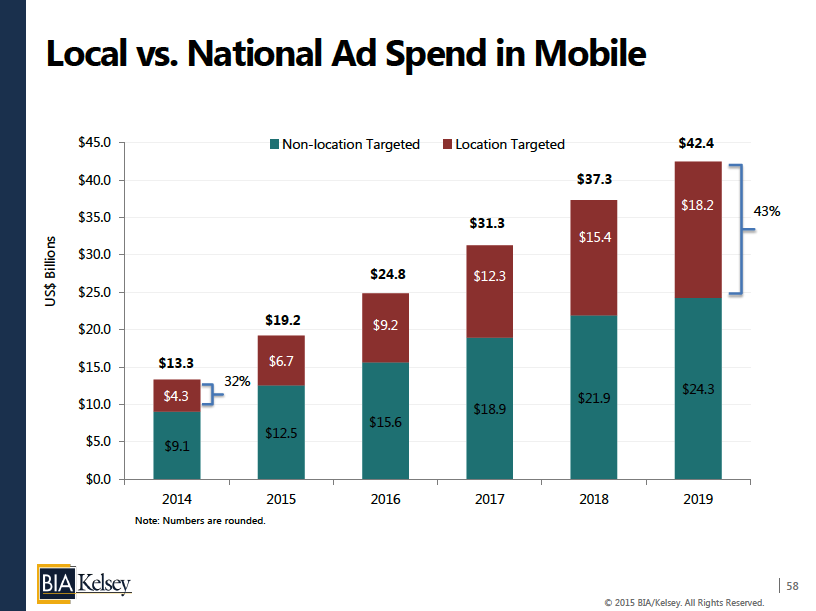