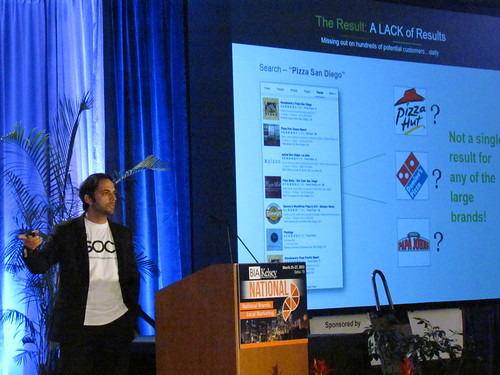 Content and intelligence drive results in social media marketing according to SOCi founder and CEO Afif Khoury. He presented findings during a segment on social media at BIA/Kelsey NATIONAL (video below). This takes form in an actionable six-step process.

Social media continues to come in proximity with localized marketing, shown most recently by Facebook’s announcement that 40 million SMBs now have active Pages. And BIA/Kelsey’s own survey data indicate that social is the most prevalent marketing channel.

But the opportunity is greater among national advertisers that are increasingly localizing campaigns. National entities are generally more adoptive than SMBs when it comes to emerging media like social. And their size makes branding (conducive to social media) critical.

The why has largely been made evident, per the above and lots of evidence in the marketplace for social’s collision with local. The remaining question is how, and that’s where we’re seeing lots of experimentation and standards development from companies like SOCi.

“Most national brands seem to think they can capture a national audience with a single page,” said Khoury. “What they’re leaving behind is the hundreds of local pages that are getting reviews, getting comments, getting activity, but there’s nobody there.”

The session clip is embedded below and stay tuned for much more conference video and highlights.