What’s the $55 billion elephant in the room? That would be the gross spend on co-op advertising annually in the US. For those unfamiliar, co-op dollars are typically funds earmarked by national brands for “market development” — local advertising or marketing campaigns on behalf of that brand (e.g. by local retailers, franchises, etc).

What makes this the all-but-ignored elephant?

Google now has a major initiative to move this large budget into the digital era, and get a higher percentage of the allocation actually spent. This was the driving takeaway from a presentation by Jon Sofield, Google’s VP of Business Development, at this week’s Street Fight Summit West in San Francisco.

A key aspect of this initiative are partnerships with service providers, such as marketing automation and programmatic media purchasing. Google now has about 170 such partnerships, many of them focusing on 8 priority verticals. (For example, one of these is B2B high tech, where co-op digital ad spend is much higher than typical, at 50 percent of total co-op ad spend.)

This represents a shift in Google’s traditional framework for reaching the SMB market, which has been focused on partnering with local sales forces and (some) direct merchant relationships. But that was when the world was still focused on the conversion from print to online.

This is now: Most of the action is now is already digital. In fact, it’s moving quickly to mobile. Sofield pointed out that Google searches crossed over into “mobile dominance” about 5 weeks ago. We chronicled that shift as well.

The emphasis has also moved from simple online presence to message-driven conversions. That means an eye towards online content, formats, and marketing initiatives that drive action. Sofield underscores the need for experimentation — and patience — with this transition. Especially with the famously-late adopting SMB set. 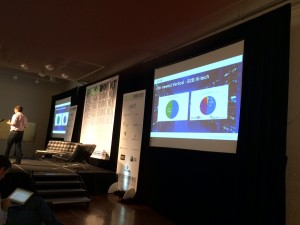