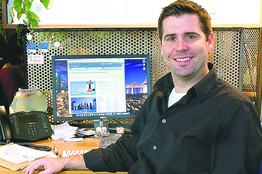 CitySquares, the Boston-based city guide company, is prominently featured in the “Small Business” section of The Wall Street Journal today (subscription required). The subject? Its frequent use of volunteer advisors (something we have firsthand knowledge of, actually).

The article boasts a big picture of cofounder Ben Saren, shown above. It notes that CitySquares’ business was rapidly declining in the bad economy we saw at the end of 2008. So it turned to its board of six volunteer advisors, who suggested a localized version of the Web site beyond Boston.

The company, which recently won some financial backing from Mark Cuban and executives associated with Gillette, has since won four national advertising customers. Last month, it had 2 million unique visitors, compared with 500,000 in September 2008.