Following yesterday’s preview of Dex’s new line of mobile search products, I had the chance to talk to the company today about the ins and outs.

First, the product line consists of an SMS search tool, a mobile Web site, a smartphone java application, and an iPhone app. The idea, as it’s been executed by many directory publishers, is to reach the greatest portion of the market possible.

“It’s all about extending your reach through different devices and platforms,” says Dex’s director of mobile and personalization, Deborah Eldred. “We want to make sure we hit the mass of the subscribers but also hit the mass of usage, which is smartphones.”

As we’ve examined, smartphones currently have less than 20 percent of U.S. mobile device penetration. So the rest of the market is primarily talking and texting. But it’s a classic 80/20 rule, the smaller portion of smartphone users account for the majority of data consumption (latest data here).

Regardless, developing mobile access for all of the above (if you can afford to) is the best way to build user engagement. This is a big initiative for directory publishers as the name of the game is to build traction and traffic to be monetized down the road.

As expected, the iPhone app has the most advanced feature set of the new line of products. The most differentiated feature (when it comes to YP publisher apps), is the “Feelin’ Like” feature. This is a spin wheel of different categories of local businesses for “Gettin’ Grub”, “Havin’ Fun” or “Goin’ Places.”

The spin wheel format reminds us of Urbanspoon’s popular local discovery engine that lots of users have come to like (see screen shot). It also creates an interface that lessens the amount of typing search terms on the mobile device.

“We’ve taken the top 200 mobile search terms in top 200 DMAs and grouped them into categories,” says Eldred. “This helps if people don’t want to type things into the fields ‘what’ and ‘where.’ ”

The mobile Web sites and SMS tools are meanwhile meant to capture users at earlier stages of their mobile adoption cycles. Then when they graduate devices, it’s hoped they will have enough brand recognition to download the more advanced Dex mobile apps.

“In the past, people turned their phones in every two to three years. Now it’s more like 18 months,” says Eldred. “The goal is for those people to have us and know us and bring us with them to their smarter phones.” 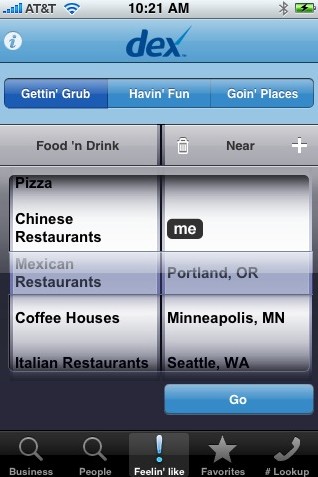 For more on the new mobile features, check out this video. (WMV)