A study commissioned by YP Holdings (formerly AT&T interactive and AT&T Ad Solutions) has concluded that phone calls generated from listings distributed on YP.com and its Local Ad Network outperformed those sourced from Google Ad Words, as measured by cost per call.

The study was conducted by Altman Vilandrie & Company, which describes itself on its website as a consulting firm specializing in telecom, media, technology and energy, with offices in Boston, New York and San Francisco.

The study’s methodology involved recruiting 62 businesses across 20 categories, covering 18 U.S. cities in nine states. The businesses were given a budget of up to $1,000 to spend on Ad Words and a platinum plus listing on YP. All 62 participants were required to have an Ad Words account, and 48 already did before the study.

The study established proxy websites for each advertiser, one for YP and the other for Ad Words, each with a unique call tracking number. The calls were tracked for a month, with some rules around call validity (e.g., no telemarketing calls, repeat calls and so on).

According to the results of the study, 43 participants (77 percent) reported less expensive calls from YP, while 13 (33 percent) found Ad Words less expensive.

While the study contends that cost per call is lower and in a more predictable range on YP, it also acknowledges that a lower cost per call is not an argument for advertising exclusively on YP.

“Advertisers must also consider call volume needs,” the study concludes. “It may not be possible for an advertiser to meet its goals by placing ads solely with YP.”

We reached out to Google to ask for its reaction to the study. The company declined to comment, citing its policy of not commenting directly on third party research. However, a Google representative did direct us to coverage of its roll out of bid per call. One impact of this move is that calls as well as clicks will factor into ad rankings, which is critical for advertisers that prefer calls to clicks as a lead source. 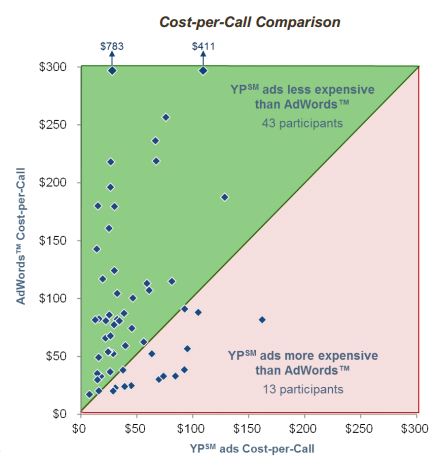