Some of the core themes today on Day 1 at Leading in Local: Interactive Local Media in San Francisco were evident in the even’t robust Twitter feed. The sharing economy (and its cousin the “1099 economy”), the growth of video, the emergence of native and programmatic, and the urgency to transform were all front and center.

Here is a sample of some of the top Day 1 tweets.

Just because anyone can make a #video, doesn’t mean that they should.” #quality #SMB @brussell8898 #leadinginlocal @BIAKelsey
— Brandon Erlacher @bserlacher

Question for the rest of the legacy YP world: How are you going to compete with a Google-esque revitalized YP? #leadinginlocal
— Abid Chaudhry @abidc

“Lead gen is a middleman, a pass thru. We do not view ourselves that way at all.” @mlz @thumbtack #leadinginlocal @BIAKelsey
— Brandon Erlacher @bserlacher

#leadinginlocal Deseret News: The print “local maximum” keeps goals focused on old media. You must be prepared to give up sales for growth.
— godsdog ‏@godsdog

Regardless of idea, CEO must be the evangelist. If there is not a good team, not for this VC portfolio. -Hsu @BIAKelsey #leadinginlocal
— Brandon Erlacher @bserlacher

#leadinginlocal“Social is a way to get an end run around search,” William Hsu.. “It has brought discovery back into the digital world.”
— godsdog ‏@godsdog 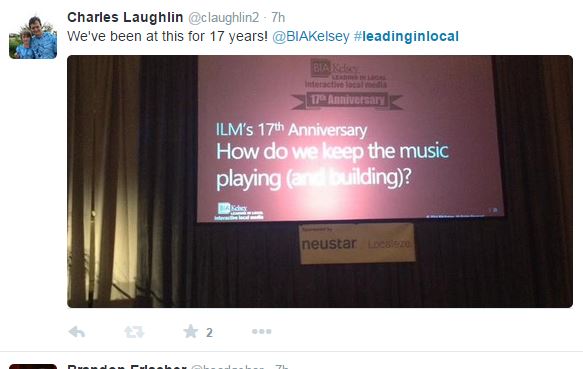