Retail SMBs are more poised than their counterparts in other verticals to adopt sophisticated digital advertising and marketing. This is clearly shown by BIA/Kelsey’s Local Commerce Monitor  (Wave 18) survey of small businesses.

There are multiple signals in the LCM data that we think point to big expansion into digital by Retail SMBs:

— They’re experienced in maintaining customer lists, with 71 percent having maintained a customer list for over a year. With 61 percent of their customer lists  in digital form, they’re well positioned to move into marketing automation services like CRM (where they’re still at a low utilization level of 21 percent).

— They’re big on customer loyalty programs, which are used by 43 percent of SMB retailers. Since only 30 percent of these programs have been digitized, we believe this too represents another growth opportunity.

In sum, we believe local retailers will be upping their digital game on multiple fronts in the near term. Since they’re such a staple of their communities, this shift will reinforce the broad and rapid digitization of daily life. 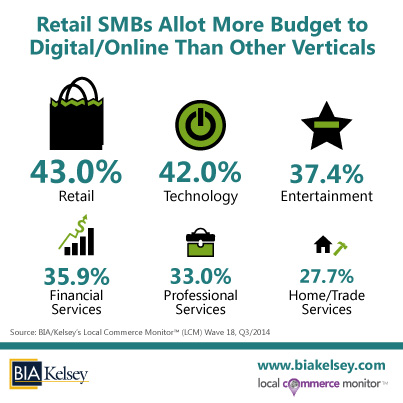 These were a few of the top-level findings of the latest cut of LCM 18, focusing on SMBs in the Retail vertical. Clients of BIA/Kelsey can access this report through our client portal. The report is also available for purchase, and more information on the LCM survey is here.