If you do a search on a doctor, you may come up with five or six spammy, ad-supported links. But now Insider Pages, a property of IAC’s Citysearch, has launched DoctorFinder, a new service that hopes to simplify the complex task of finding good medical recommendations. Revenue-wise, the service is hoping to get the high CPMs associated with medical search, which can be in “double digits” for general practitioners and as high as $80 to $100 for specialists such as chiropractors.

General Manager Eric Peacock tells us that most review sites have focused on restaurant reviews and beauty salons “but it is hard to pick a doctor. We’ve been coming up short.” He says that the joke at his company is that “most people spend more time picking out a flatscreen TV than picking a doctor.”

Medical information is especially well suited for Insider Pages user demographics, which lean toward “middle-aged mothers who may be looking for a pediatrician that takes Blue Cross and is located two miles from their house,” says Peacock.

Insider’s efforts will collect three pieces of information: types of insurance accepted, practitioner credentials and patient reviews. The reviews are based on a 10-question survey that asks key questions such as “does the doctor spend appropriate time with you? Does he listen to your questions?”

The Insider surveys are being conducted in partnership with HealthGrades, which already has a 1.2 million review database, and information on 800,000 U.S. doctors. Peacock notes that HealthGrades is not directly competitive with Insider Pages because its primary business is providing data to hospitals and other medical businesses.

Information provided by the key insurance companies may prove to be more competitive. Anthem, for instance, partners with Zagat for its online review database. Blue Cross, Aetna, Kaiser and Cygna also have major online efforts. 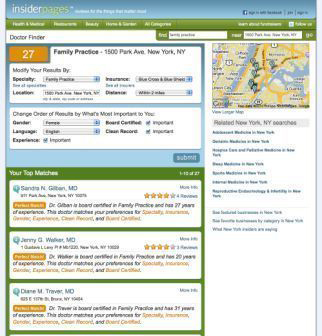