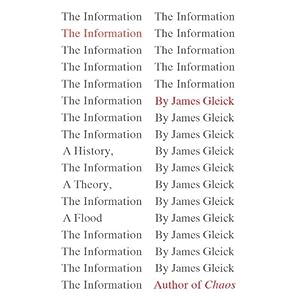 “The Information: A History, A Theory, A Flood,” the new master-work from science writer James Gleick, examines the origins of communications and its impact and integration into fields as diverse as physics, electrical engineering, mathematics and even biology. It’s a fascinating trip that takes the reader from the superior speed and clarity of talking African drums in the 19th century all the way to Google and search.

Gleick begins his exploration of communications with McLuhan’s concept that communications have gone from “symbols to words and back to symbols.” But in the computer age, Gleick argues that it goes deeper, as “logic was reanimated with the invention of machinery that could work upon symbols. In logic and mathematics, the highest form of reasoning, everything seemed to be coming together,” notes Gleick.

The big breakthrough here was Claude Shannon’s revelatory Information Theory in 1948, which finally determined that information is composed of a torrent of bits. Given the increasingly massive amounts of information that was capable of being processed, it was, in essence, less important to get hung up on a message’s meaning. At least for machines.

The back story to Shannon’s discovery is an interesting one. Shannon, a Bell Labs mathematician, was working with the Army to decipher encrypted Nazi communications. For Shannon, it was clear that the Nazis weren’t sending random messages. But it wasn’t until he could simply break up the messages into “bits” — and then reconfigure them — that he could make sense of them. For Shannon, it was about “the information source,” “the transmitter,” “the channel,” “the receiver,” and “the destination.”

Gleick, who made his fortune as the developer of Pipeline, a pioneering, New York-based Internet service provider, has an incredibly wide-ranging lens here. He’ll reacquaint you with many subjects that you likely haven’t considered since high school or college. “The Information” goes very deep in some areas that might exceed your natural curiosity (20 pages on the formation of the alphabet, etc.). But there are also sections of fascinating history and the big ideas that are important for understanding our information culture today. It is an important work.