EyeTrackShop, a digital marketing search firm, just released the findings of its October 2011 study on smartphones and tablets. Apple’s iPhone and iPad were the most visually appealing, drew the most attention, and if cost were not an issue, are the ones consumers want to own.  Samsung, HTC, Nokia, Motorola and Amazon are among the other smartphones and tablets evaluated.

200 U.S. consumers were selected for the study, where pictures of the following phones and tablets were distributed via uSamp with links to EyeTrackShop’s webcam eye tracking. The eye tracking measured what caught and held consumers attention in addition to a questionnaire where opinions were also gathered. 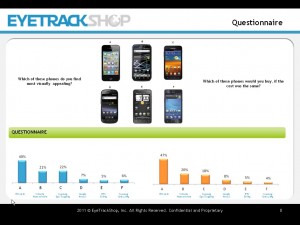 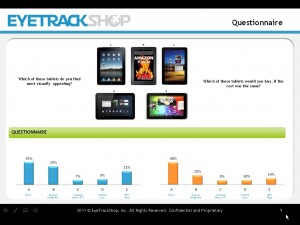