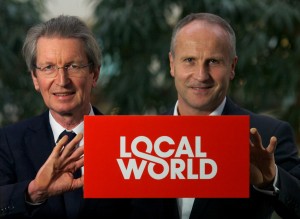 The UK local newspaper industry has been a segment in decline as companies worked margins by cutting costs in an attempt to keep air flowing under the wings as they faced declining revenues. Where does this leave the future of local and regional news? This week, we got a glimpse of this as a new joint venture was announced that consolidates 107 regional newspapers and 63 news portals from Daily Mail and General Trust, Yattendon and Trinity. The new venture will be chaired by former Mecom CEO David Montgomery with Northcliffe’s CEO Steve Auckland (pictured above) taking over the same role at Local World.

One benefit the newly formed Local World will have is a reduced cost structure as is will launch debt free and without pension liabilities. According to Paid Content, the deal structure includes four companies:

More About Advertising reported that Jonathan Harmsworth, chairman and de facto owner of DMGT, turned down a $1bn private equity bid for his Northcliffe regional newspaper business a few years ago, holding out for $1.2bn. Now the papers are valued at no more than $100m, making his decision one of the more expensive in British newspaper history.

What is the plan to aggregate a slew of local newspapers, including many not breaking even, into a scaled, local media success formula? Local World is intent on increasing the newly consolidated properties’ digital revenues from 8.4% to 20% of total revenues. Some of the key elements in its plan to achieve this goal include:

Some question the level of investment in the digital side as relatively anemic given the level and state of competition. For example, major directory player, Hibu, is facing challenges of its own having recently undergone a name change from the Yell Group and trying its own pivot in response to declines in its core business, as BIA/Kelsey covered in a blog post last spring.

While it may seem a bit curious to expect success from consolidating a group of over 100 newspapers and dozens of digital portals many of which are money losing; it is even more curious to target the online directory focus as key to success when even category leader Hibu is facing their own dire financial circumstances including threatened liquidation by creditors.

In fact, looking at Hibu’s otherwise declining financials, one ray of hope was in the digital services line of business which showed a 38% increase to $82m through September 30th versus another decline of 15% to $134m. Perhaps Local World might learn from the examples of others and consider a business strategy of not just cost-cutting to consolidate content that is scaled through centralization; reduced publishing frequency and seemingly non-innovative digital strategies. On the consumer side, BIA/Kelsey sees features including mobile (including the fast growing mobile search segment), social and video as driving and sustaining consumer engagement, especially in a digitally savvy market like the UK. On the advertiser side, pricing and bundling advertising, marketing and other services is proving out to be a more viable formula.