Deals are fading for many publishers. Group Commerce Inc., for instance, is just the latest company to cut back on its support of local deals. But for local businesses, deals remain potent building blocks for a wide range of promotional sales formats.

SignPost, Local Offer Network, Boomtime, Analog Analytics and Second Street Media now incorporate a range of local offer formats. These can include deals, coupons, gift certificates and contests. So is San Diego-based Deal Current, which is specifically focusing on coupons to move beyond deals: both traditional, flat rate coupons, and performance-based coupons.

While deals remain attractive for their games- like excitement – especially in high margin categories — coupons are preferable to deals in many instances. They don’t churn as much and aren’t as time pressured – coupon customers tend to stick with the channel for years on end, and tend to add to their budgets as results are proven. They also work everywhere, unlike mobile-limited channels such as Groupon Now; and they don’t require businesses to share revenue.

Deal Current’s innovation with coupons is offering a performance-based option. It enables publishers to work with advertisers with no upfront costs. As President Patrick Dillon notes, “It is like AdSense, but better because you don’t prefund the account.”

Dillon notes that a performance-based model incents publishers to circulate the coupons around the Web with SEO and aggregators. A performance based coupon, in fact, might look and perform like a text ad, but will cost 40 percent less than comparable online ad choices.

While performance based coupons have advantages, Deal Current is decidedly agnostic which promotional platform is ultimately used. Its model calls for businesses to pay a minimum monthly fee to access the system. They can then choose to use deals, traditional flat rate coupons or performance based coupons. A publisher basically needs to gross $3,571 a month from its deals to earn back the minimum fee (before revenue splits).

The company has been testing the model in San Diego with eight publishers since April of 2012. The model is now ready to be rolled out nationally. It’s a way for publishers to add $80,000 a year in revenues in a single market, suggests Dillon. 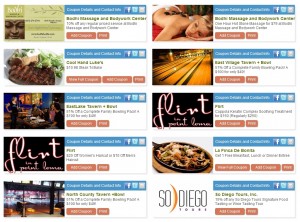