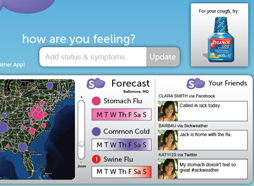 Nobody wants to be sick. So imagine if it were possible to track an illness the same way a Doppler radar tracks the weather. That’s the vision behind Sickweather LLC. Graham Dodge, a cofounder, told BIA/Kelsey he got the idea after working on a crime map app for Crime.com during the first dot com bubble. Dodge says he observed his Facebook friends posting statuses about their health, including “everything from the flu to cancer.”

Sickweather scans social networks using an algorithm and qualifies real-time data from Facebook, Twitter, other public sources and its own online community for indicators of illness. Users can check for the chance of getting sick from a viral stomach bug similar to the way most check for rain.

Dodge plans to contact hospitals and the Centers for Disease Control for their input and to gather sources of data to help drive innovation. Currently, the Web-based app is in closed beta testing. In July, the site plans to launch publicly. Other future plans include rolling out a mobile app version compatible with iPhone and Android.

Dodge, along with his friends James Sajor and Michael Belt, funded the company. Longer term, Dodge expects the company to be supported by advertising. Specifically, he plans to approach pharmaceutical companies and health-care providers about advertising. Dodge says he is “exploring his options” and is currently talking to different ad platform companies like Pontiflex.