Appearing at a time of rumors that Google is in talks to purchase a slumping Groupon on the cheap, Groupon CEO Andrew Mason told The Mobile-Loco conference in San Francisco that the four-year -old, 12,000 employee company remains focused on developing “the first real, local commerce system” for merchants.

The timing of the company’s ascent is perfectly aligned with the rise of mobile, noted Mason. “We have 40 million active customers. We acquired our customers at a time when mobile is paving the way for local commerce,” he said. Mason added that mobile customers spend more than purely desktop customers.

Groupon is still pegged in many circles as a daily deal company, but Mason says it is a broader play now. The company extends the reach of local customers by “enabling dynamic pricing,” he said. Whatever is ultimately included in its suite of services, there will be “some kind of customer dial and deal management tools” that level the playing field for SMBs with large corporations.

Offers are also highly targeted, boosting yield. “We don’t get complaints about sending pole dancer Groupons anymore because we are only sending them to pole dancers,” said Mason. 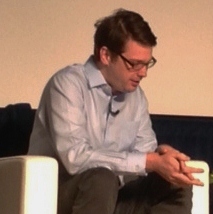