U.S. SMBs are increasingly using social media, such as Twitter, to advertise and promote their business to customers and to connect with them. According to BIA/Kelsey’s Local Commerce Monitor™, SMB usage of Twitter for advertising and promotion has been steadily increasing over the past few years. In Wave 17 (2013), 24.3% of SMBs used Twitter for advertising and promotion, up from 22.0% in Wave 16 (2012) and 16.1% in Wave 15 (2011).

Twitter is just one of the many online and offline media that BIA/Kelsey tracks in the latest wave of the Local Commerce Monitor™ (LCM). LCM is BIA/Kelsey’s long-running study of how U.S. SMB advertisers are evolving their use of media to acquire and retain customers.

SMBs perceived ROI (return on investment) for Twitter has increased over the past three years. As shown in the chart below, in Wave 17 nearly a third of SMBs surveyed rated Twitter’s ROI as Excellent (10-19x Spend) or Extraordinary (Over 20x Spend), compared to 25% in Wave 16, and 17.1% in Wave 15. 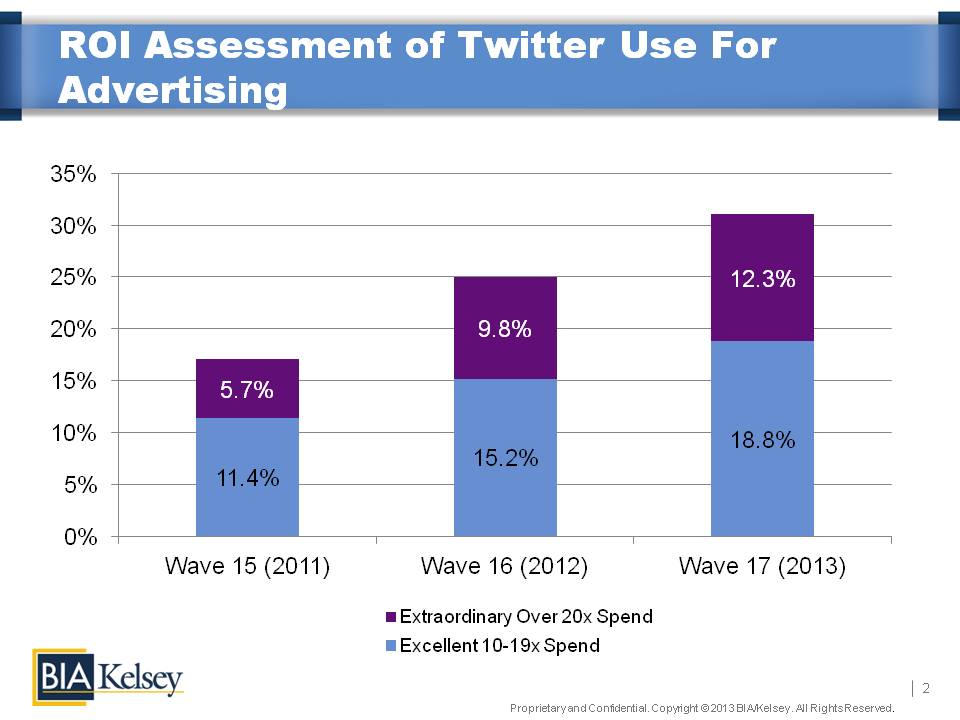 Interested in learning more about LCM Wave 17 or getting a custom cut for your business? Check out BIA/Kelsey’s LCM page.

We’ll be covering this and other themes in great depth at our upcoming conference, Leading in Local: Interactive Local Media, December 10-12 in San Francisco. Be there and join the conversation!

If you are looking for more information on Twitter’s recent IPO, try Jed Williams’ blog post “Twitter’s IPO: What Are 140 Characters Really Worth?”