SMBs that use video advertising have bigger ad budgets, tend to be early adopters in their use of digital compared to their counterparts and are savvier in how they leverage data and analytics to engage and interact with their customers.

Video is proving to be a strong a media channel for businesses to advertise their message. Before Super Bowl XLVIII even started, Budweiser’s #BestBuds had been viewed on YouTube an unheard of 33 million times.

BIA/Kelsey examines these differences this week in a new “Spotlight” report using data from the recently completed Wave 17 of the Local Commerce Monitor (LCM). The report is the latest in the ongoing “Spotlight” series that drills down into the LCM data to examine how SMB advertisers acquire and retain customers.

The LCM Wave 17 data shows that SMBs that identify as “video SMBs” differ from those that do not use video advertising in several important ways:

— Annual media spend for SMBs that use video advertising $53,815 compared to $24,049 of that non-video advertisers.

— Video SMBs are more likely to offer a customer loyalty program, compared to those that don’t use video to advertise 60% vs. 31%.

— Video SMBs are adopting other digital-based channels quickly. 5 out of the top 8 future marketing priorities are non-traditional and digital media types which include some the following: social media advertising, advanced analytics and performance monitoring, SEO, and video advertising. 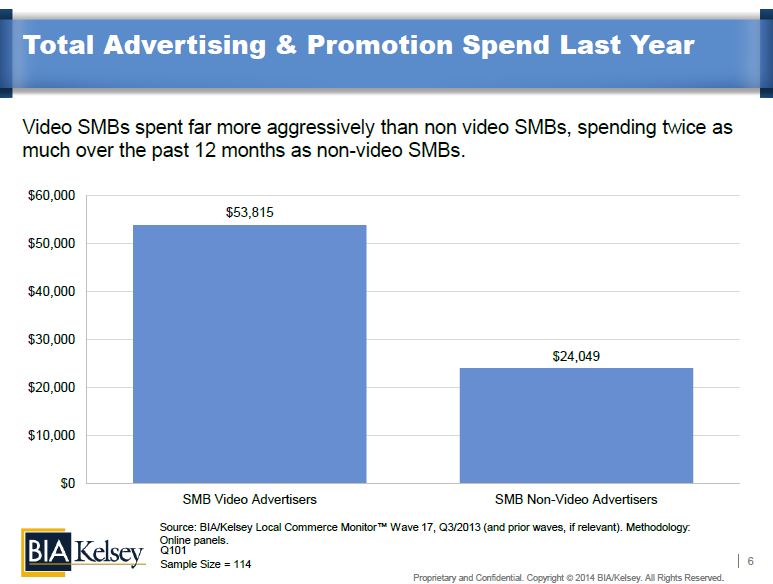 Interested in learning more about LCM Wave 17 or getting a custom cut for your business? Contact Celine Matthiessen at cmatthiessen@biakelsey.com.